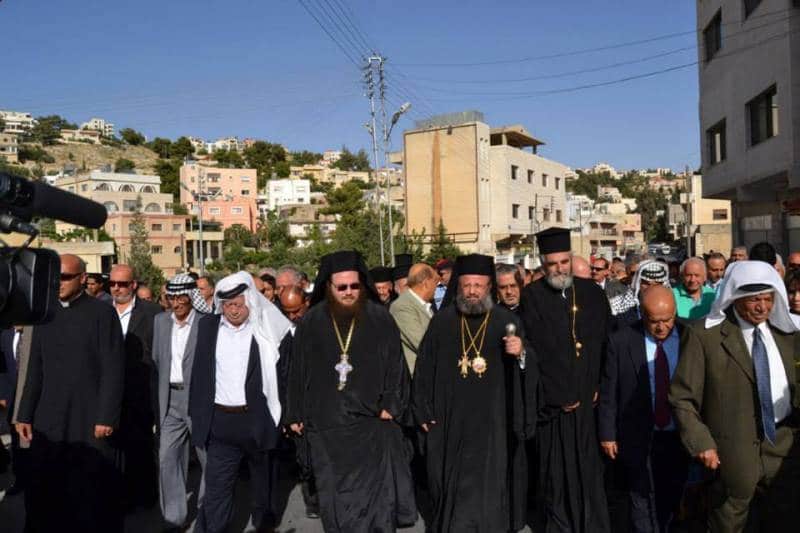 RECEPTION HOSTED IN HONOUR OF PHILOUMENOS, ARCHIBISOP OF PELLA

On the evening of Tuesday, the 22nd of May/4th of June 2013, a reception was hosted in honour of the recently ordained Philoumenos, Archbishop of Pella, organized by his clan in his birthplace of Fhes, a suburb of Amman, Jordan. The Arab community is structured according to this division system across tribes of cultures (known as clans), namely wider family groups.

Archbishop Philoumenos was honoured by the presence of His Beatitude Theophilos, Our Father and Patriarch of Jerusalem, and of his retinue from Jerusalem, namely Aristarchos, Archbishop of Constantina and Grand Chancellor, f. Issa Musleh, head of the Arab section at the Patriarchate’s Press Office, Hegoumen Archimandrite f. Ieronymos and his holy aides, and several dignitaries and laymen, numbering approximately 500, residents of Fhes and other cities, members of the family and clan of the Most Reverend Philoumenos and in the presence of the Prime-minister of Jordan, Mr Abdullah Ensour.

During the course of the dinner and reception, the Most Reverend Archbishop of Pella addressed His Beatitude, welcoming and thanking Him on his election, paying tribute to his birthplace, Fhes, and expressing his gratitude to his parents, the members of his clan, his compatriots and His Majesty the King of Jordan.

Addresses were also directed by other State and communal delegates, who referred to the history of the city of Pella-Irbet, the name of which has been conferred on the title of the Most Reverend Philoumenos from the beginning of Christianity, when between the years 70-132 AD it was inhabited by Christians of Jerusalem. Reference was also made to the honour bestowed upon the city through the election of the Most Reverend Philoumenos, and to the conditions of peaceful coexistence among Christians and Muslims under the tolerant and wise rule of His Majesty, King Abdullah II bin Al-Hussein.

His Beatitude Theophilos, Our Father and the Patriarch of Jerusalem, offering an icon of the Mother of God as present to the Most Reverend Archbishop Philoumenos, closed the reception with this reply, at link: https://en.jerusalem-patriarchate.info/ar/2013/06/04/2444/

On the following day, Wednesday the 23rd of May/5th June 2013, His Beatitude visited the city of Irbet in Northern Jordan and was informed on the renovation works underway for the installation of the recently appointed Patriarchal Commissioner of Northern Jordan Towns, Philoumenos, the Archbishop of Pella.