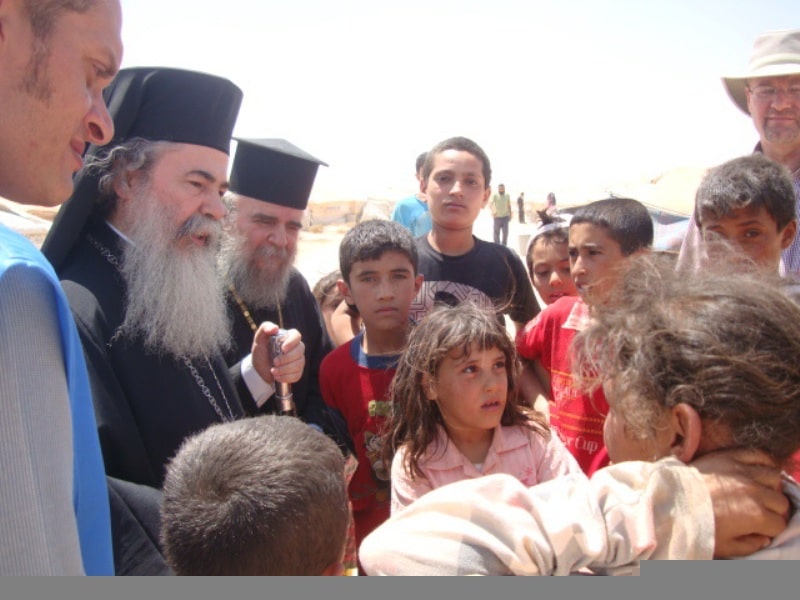 On Monday, August 6, 2012, His Beatitude Patriarch Theophilos III, Greek Orthodox Patriarch of the Holy City of Jerusalem and all of Palestine and Jordan, and President of the Middle East Council of Churches for the Orthodox Family, expressed his concern for and acted out of what he called a “moral duty” by making a pastoral visit to the Syrian families who have fled the deteriorating situation in Syria, And who have  sought sanctuary in the Al-Zaitari Camp located just a few kilometers from the city of Mafraq in northern Jordan.

His Beatitude’s  visit comes out of a genuine sense of love and concern for the people who are caught up in this humanitarian crisis. The local church is committed to the Christian mission found in Mathew 25:35,36 –  “for I was a stranger and you received me, sick and you visited me, hungry and you gave me food, naked and you clothed me.”

“It is a moral duty for the church to support and be present those who suffer , who at this time need everyone’s love and assurance”, His Beatitude stated.

The Church is in prayer for peace, and a desire that all might soon return to their homes and country, being especially mindful of the children, who need to be at home and in secure dwellings.

His Beatitude expressed his deep gratitude for Jordan and especially for His Majesty King Abdullah II and the Hashemite Kingdom , for welcoming the refugees and hosting them in the best possible way.  Jordan has, throughout its history, accepted within its borders many people in need of help , hosting them as guests until the day when they can once again return home safely.

His Beatitude was briefed by the Jordan Hashemite Charity Organization and the UNHCR representatives as to the current situation and conditions within the camp.

The Orthodox Church has pledged to provide assistance .

“We call upon all people of goodwill to join us in this humanitarian effort”.