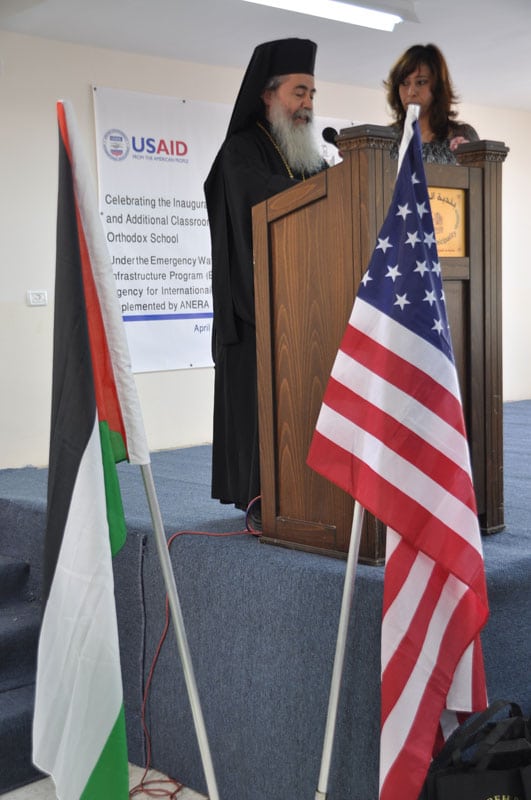 HIS BEATITUDE INAUGARATES THE NEW WING OF THE PATRIARCHATE SCHOOL IN TAYBEH.

On Tuesday, the 21st of March / 3rd of April 2012, His Beatitude Patriarch of Jerusalem Theophilos III inaugurated the new wing of our Patriarchate’s school in Taybeh.

Taybeh is a suburb of Ramallah with 35.000 residents, three thousand of whom are Arab-speaking Orthodox belonging to the Patriarchate.  The Patriarchate of Jerusalem operates its privately owned school, founded in 1875, the first to be established in the surrounding areas. The school has a Kindergarten, the Primary School, a Gymnasium and High School numbering 500 students from the local area and staffed with thirty five teachers and professors.

A new wing was added to the school, financed by USAID (United States Agency for International Development) and carried out by ANERA (American Near East Refugee Aid). It will cover mostly the Kindergarten classes but it will also serve to the tutorial and laboratory needs of other Departments as well.

His Beatitude performed the ceremony of the Blessing of the Water and then by blessing the new premises inaugurated the school’s added wing.

At the inauguration present was the escort of His Beatitude from Jerusalem namely; His Eminence Hysihios Metropolitan of Capitolias and President of the Education Committee of the Patriarchate, the Elder Chief Secretary His Eminence Aristarchos Archbishop of Constantina, Reverend Fr. Issa Mousleh from the village of Beit -Sahour and member of the Education Committee,  the superior of the Holy Monastery of Transfiguration and Patriarchal Representative in Ramallah Rev. Archimandrite Fr. Galaktion and Archdeacon Athanasios.

Present at the inauguration were also; the Prefect of the Ramallah and Bireh area representing the Palestinian Authority  Mrs. Laila Ganam and other dignitaries of the Palestinian Authority, the representative of the American Government and USAID Mr.  Basam Rifai, the Mayor of Taybeh Mr. Daoud Kanaan, representatives of other schools in the area and of the city’s Associations along with numerous residents.

Speakers at the ceremony were the School Mastress Mrs. Ambir Hourigie, the Prefect of the area of Ramallah and Bireh Mrs. Laila Ganam, the Mayor of Taybeh Mr. Daoud Kanaan, the representative of USAID Mr. Basam Rifai and student representatives. The school’s students presented a variety of folklore dancing on stage and received a warm applause followed by gifts.

The inauguration ceremony was completed by the address of His Beatitude Patriarch of Jerusalem Theophilos III. (see the following link: https://en.jerusalem-patriarchate.info/2012/04/03/1927/ )

The School bestowed commemorative boards of gratitude to His Beatitude, to the representatives of USAID and ANERA, to Fr. Constantine Naser who aided financially and to other sponsors.