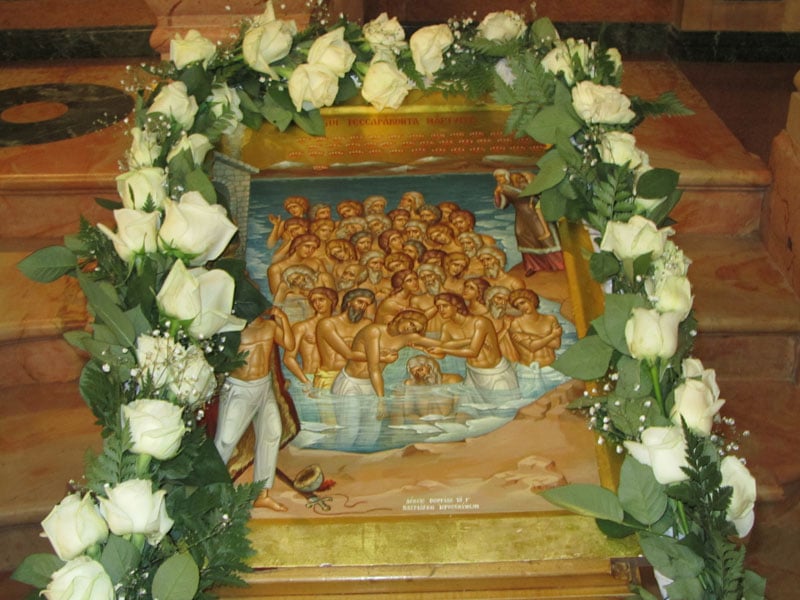 THE NAME DAY OF HIS BEATITUDE PATRIARCH OF JERUSALEM THEOPHILOS III.

On Thursday, the 9th / 22nd of March 2012, the Patriarchate of Jerusalem celebrated according to the order of the rite and the Status Quo, the Feast of the Fourty Martyrs and in this context celebrated particularly the Name Day of His Beatitude Patriarch of Jerusalem Theophilos III, named after one of these glorious  Martyrs.

On the eve of this Feast, the 9th Hour was read at the Monastic Church of Saints Constantine and Helen, followed by the solemn descent via the Christian Road to the Church of Resurrection.

The entrance to the Catholicon took place and then the veneration of the Holy Calvary by the Archbishops and the hieromonks, members of the Holy Synod. The Vespers then initiated with the ceremony of the Blessing of the Bread presided over by His Beatitude, whilst the deacons offered thymiama  to the surrounding Holy Shrines.

After the Vespers where concluded the solemn ascent of the Brotherhood to their Central Monastery took place.

The morning of the Feast Day started with the solemn descent to the Church of Resurrection where the Liturgy of the Pre-Sanctified Gifts was initiated, presided  according to the order, only by His Beatitude, whilst the Archbishops of the Brotherhood were praying in the Holy Altar of the Catholicon. His Eminence Anthimos Metropolitan of Alexandroupoleos was also present as the representative of the Church of Greece. Present at the celebration were: the General Consul of Greece in Jerusalem His Excellency Sotirios Athanasiou, the Ambassador of Greece in Amman of Jordan His Excellency Heracles Asteriadis and the Ambassador of Belarus to Israel. Numerous hieromonks, members of the Brotherhood of the Holy Sepulchre, participated devoutly along with married Priests of our local community, pilgrims and local faithful.

When the Holy Liturgy was completed it was followed by the Doxology – Te Deum,  presided by His Beatitude, concelebrating with Hierarchs dressed with Epitrahilio & Omoforio.

After these ceremonial events at the Church of Resurrection, an official and panegyric ascent took place to the Patriarchate, where at the Throne Hall; the Elder Chief Secretary His Eminence Aristarchos Archbishop of Constantina addressed His Beatitude, in the name of the Holy and Sacred Synod and the Brotherhood of the Holy Sepulchre.

Address of the Elder Chief Secretary His Eminence Aristarchos Archbishop of Constantina on the occasion of the Name Day of His Beatitude Patriarch of Jerusalem Theophilos III at The Throne Hall:

Today on the 9th of March, in the middle of the Lenten period, the Orthodox Church is spiritually rejoicing and solemnly exalts on the Feast day of the Fourty Saint Martyrs; in memory of their martyrdom death at the lake of Sevasteia in Pontos. In addition, the Church of Jerusalem is celebrating the Name Day of its Father and Shepherd,  worthy to bear the name of one of these crowned martyrs.

This double Jerusalemite feast was celebrated with the sacrifice of the Pre-Sanctified Gifts and the Doxology-Te Deum taken place at the Church of  Resurrection. Participating were pious priests and believers of our Lord’s people from nearby areas, but also from those afar areas of the Church of Jerusalem. Present was the whole of the August Brotherhood of the Holy Sepulchre whose superior  – Your Beatitude – was elected with the canonical and unanimous votes of the Holy and Sacred Synod six years ago.

We manifest our joy at this historic hall of the Patriarchate and congratulate Your Beatitude adding ‘whatsoever things are true and just, lovely and of good report’ (Phil.4,8). This is declared by Your works with the cooperation and assistance of the Brotherhood of the Holy Sepulchre and that of the Holy and Sacred Synod.

From this cooperation, and despite the imperfections and deficiencies that accompany all human works, resulted in good deeds, liturgical, sanctifying, heraldic, pastoral, philanthropic and social.

Your Beatitude responded positively to the invitations received from the numerous churches of Our flock and willingly visited them in addition to the ones Your Beatitude deemed necessary to, or the ones that imposed Your guidance for the resolution of a problem and for providing aid morally or materially, where needed. Likewise Your Beatitude advocated to representatives of state Organisations and to those of Non Governmental Organisations for the needs of the flock of our Sion Church and for the presence of the Christians in the Middle East in general. Your Beatitude advocated for their education and the protection of their rights; in favour of their survival in conditions of prosperity and dignity at their respective countries of birth. This support of the Middle East Christians is rendered at present stronger through the Middle East Council of Churches. The Patriarchate played a paramount role in the reorganization and upgrade of the Council. For this purpose, of collectively supporting the rights of the Christians as a minority in their birthplace, the Holy Land, Your Beatitude directed properly and with agility numerous meetings of the Leaders of the Christian Churches of the Middle East realised at the Patriarchate under Your Beatitude’s auspices. These rights of the Christians Your Beatitude properly presented them, during last December’s meeting in Fhues to the King of Jordan and at the Presidential Palace during Your address to the President of the State of Israel, on behalf of the Christian Communities on occasion of the new secular year of 2012.

Regarding the section of the inter-Orthodox Ecclesiastical Cooperation there was considerable improvement. Between others, the recent visit to the sister Autocephalous Church of Cyprus, was marked from the laying of the foundation stone for the restoration of the Exarchate of the Holy Sepulchre, nearby the Archbishopric of Cyprus. Fruit of this cooperation is also the enrollment of five members of our Arab-speaking flock at the Religious Seminary of the Church of Cyprus.

Our historic rights on the Holy Shrines stipulated by the prevailing Status Quo where safeguarded and where exercised entirely. This was demonstrated by successfully protecting these rights from the provocation of the Armenians which caused problems during the yearly cleaning of the Basilica of the Nativity in Bethlehem. With the cooperation of the Franciscans and the support of the Palestinian Authority, the damage caused by the Armenians on the floor of the Holy Grotto in Bethlehem, was restored.

There was also success in the efforts to staff the Holy Shrines and due to the creation of a climate of trust and security, new students arrived at the Patriarchal School of Holy Sion as well as new members were admitted to the Brotherhood of the Holy Sepulchre.

These are mentioned as the fruits of the common efforts of Your Beatitude and of the Brotherhood of the Holy Sepulchre, not for the boast and not for repose, but for the just praise which deservedly accounts for whoever demonstrates good deeds. Thus the members of the Brotherhood of the Holy Sepulchre be encouraged to advance creatively in performing and fulfilling our duties for the years to come, reinforced by the grace of God.

Your Beatitude in the name of the Holy and Sacred Synod and of our Brotherhood of the Holy Sepulchre, we wish You from our heart many healthy years to come, power, peace and constancy with joy in the view of the good deeds for the glory of the Trinity, our God and praise of our blessed genus. Amen.