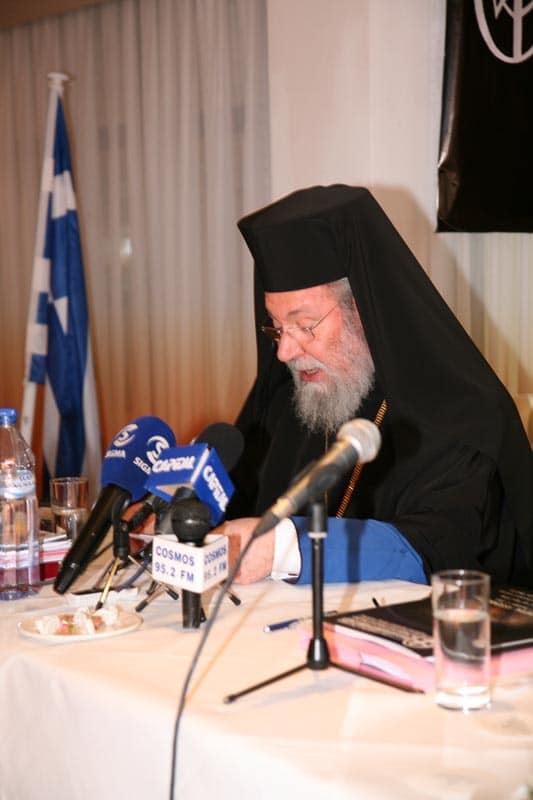 ADDRESS BY H. B. CHRYSOSTOMOS II ARCHBISHOP OF CYPRUS TO THE GENERAL ASSEMBLY OF THE COUNSIL OF CHURCHES OF THE MIDDLE EAST

It is with feelings of great joy that we greet today the 10th General Assembly of the Council of Churches of the Middle East.

The Church of Cyprus, and we personally, welcome to our island, with great pleasure, the honourable Representatives – clerics and laymen – from the various Churches – members of the Council of Churches of the Middle East. We thank you and we welcome you all. You all, guided by the true spirit of the Christian love, have responded to the invitation and came here, so that all together we will exchange views and respond to the many and serious problems which concern us.

Thirty-seven years after the Initiating Assembly of the Council of Churches of the Middle East in Cyprus, spearheaded by the late Archbishop Macarios III, the Church of Cyprus has the distinguished honour to host the 10th General Assembly. We are confident that this Assembly, as well as the Initiating one, will be a milestone for the future and the history of the Council and for the further development of the Ecumenical Movement in the region.

The presence of all of you here highlights, and also confesses, the great significance and importance, which the current General Assembly of the Council of Churches of the Middle East has. During the critical times that we are experiencing, in which we are witnessing acts of violence, religious fanaticism, intolerance and religious discrimination in the wider region of the

Middle East and North Africa, this General Assembly attracts the immediate interest and attention of all Christians in this sensitive area of our world. Therefore, as religious leaders we need to hear the messages of our peoples for freedom, democracy and dignity against regimes, which – in their agony to survive – spread terror, violence and death to their people.

We have a strong view that the time is here, when all together – all Churches of the Middle East – we have to join forces and work consciously towards resolving many, various and serious problems that exist in our region, especially the prevalence of peace amongst our peoples and countries.

Our responsibility to work for peace, is primarily a result of our responsibility towards God; all human beings were created according to His image. Moreover, the concept of peace is tied up with the presence of God amongst humans and is not limited simply to a word which denotes the absence of war. It has a deeper meaning and this becomes clear from the first moment of the presence of the Saviour on Earth, and the hopeful message of the angels , which is carried to the whole of humanity “Glory to God in the highest and on earth peace, good will toward men».

Developments are running fast in our region and we cannot be ordinary observers in what is happening around us, nor can we just follow the events. Our responsibility is to keep in pace with developments and – to the possible extent – to modify them towards the benefit, progress and prosperity of our peoples. Besides, this is required as our duty towards the future generations and towards our children, for which we must secure the right to live in a better, safer and more peaceful world, at local, regional and international levels.

To be able to exercise our role, as the Middle East Council of Churches, and to make an active contribution to a better and happier world in our region, without wars and bloodshed, it is realised that we must resign ourselves to Christian love and, in a spirit of goodwill and understanding, beyond mere rhetorical expressions, in order to see the problems which concern us, to confront the difficulties and challenges, to respond, to make decisions and resolve them. This is the moment at which our words and our values are turned into action and projects, which will contribute to the culture of peace in the region.

Primarily, we highlight the need for reconstruction of the Middle East Council of Churches, so as to make it more effective in its decisions and actions. Undoubtedly, there were and there are economic difficulties, which need to be addressed, taking into account, of course, today’s difficult economic situation, which exists worldwide. However, weaknesses have been observed and the functioning of the Secretariat of the Council, resulting to a lack of coordination and harmonious cooperation between the member churches. All these have to be resolved, otherwise, the Middle East Council of Churches will not be able to respond to the esteemed causes of its establishment and operation.

At the same time, the Middle East Council of Churches should create those appropriate structures and programmes, through which the representatives of the Churches of the Middle East, will be able to meet, discuss, and seek answers to many important issues associated with the Christian presence in the Middle East. However, our commitment to a greater and better understanding and dialogue cannot be limited just among Christians. It is also our responsibility to develop harmonious and friendly relations amongst Christians, Muslims and Jews. Consequently, we must reaffirm the common values of love, mutual respect and understanding, as they are so aptly and beautifully recorded in the Holy Bible: “Let us love one another, for love is for God and everyone who loves is born of God and knows God. He who does not love does not know God, for God is love” (1, John A:7). The opening of an Interreligious Dialogue will enable the Middle East Council of Churches to become the catalyst of developments in the Middle East.

We wish, on this occasion, to express our deep appreciation to the hitherto considerable work and great service of the Council not only to

Christians, but in general and to the people and countries of our region. Undoubtedly, however, much remains to be done.

We reiterate that the current General Assembly of the Council of Middle East Churches is meeting at very difficult and critical times for our region. We all live and experience these. We especially note the sad events of the resurgence of religious fundamentalism and significant violations of religious freedoms.

Unfortunately, we are sorry to say that, also, in the occupied northern area of our island, for almost thirty seven years now, following the invasion by Turkish troops, basic human rights are being violated and religious freedom is not respected. Since then, and in all these years since 1974, to the present day, we have no right to perform our religious duties, to protect and conserve our ancient churches and monasteries. These ancient churches and monasteries have either been destroyed or looted; some were transformed into Muslim mosques, others into leisure centres and others into yards for sheep or stables of animals.

We stress, once again, that during these critical times, which we undergo, a perfect and harmonious collaboration of all Christians and of all the Churches of the region is needed and required. The current General Assembly of the Council of Middle East Churches is called in this effort to overcome the existing internal problems and other difficulties, and to give evidence of its contribution.

In conclusion, we would like to stress that the peace process is a matter of personal and institutional choice. The power either to increase the pain in the world, or to contribute to healing the wounds, is in our hands. Once again, we stress that it is a matter of choice. Today, we are here following the urgings of Holy Scripture: “my little children, let us not love in word or in tongue, but in deed and in truth” (1 John, 3:18). We are here because we have made our choices: we have established peace over war, hope over despair, and love over hatred.

It is with these general considerations, that we welcome the work of the General Assembly and we wish, from the bottom of our heart, success of our efforts, so that soon the spirit of Christian love and Christian peace be established in our countries and our people. Our wholehearted prayer to the Arch-shepherd Christ is that the day will come on which his fervent desire “that they all may be one” (John, 17:21) will become a reality and his faultless prophesy “there will be one flock and one shepherd” (John, 10:16) will come true.

+ THE ARCHBISHOP OF CYPRUS CHRYSOSTOMOS