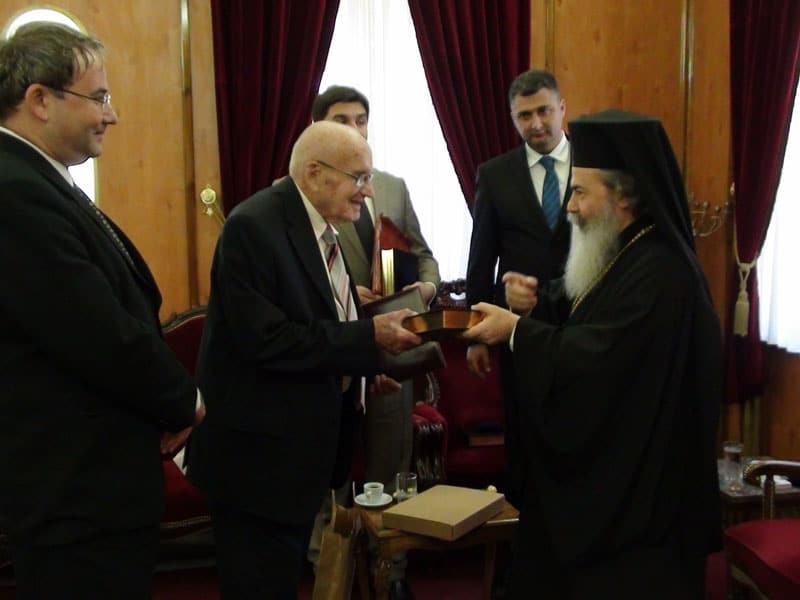 THE MINISTER OF AGRICULTURE OF THE DEMOCRACY OF SRPSKA VISITS THE PATRIARCHATE.

On Saturday, October 30th / November 12th 2011, the Minister of Agriculture, Forestry and Water Management of the Autonomous Republic of Srpska, in the frame of the wider Federation of Bosnia and Herzegovina, Mr. Miroslav Milovanović, accompanied by one of his counsels, under the Manager of the Office of Srpska in Israel Mr. Ariel Livne and by the Special Advisor of the Delegation of this country to Israel Mr. Aleksandar Nikolić, visited the Patriarchate.

His Holy Beatitude our Father and Patriarch of Jerusalem Theophilos cordially accepted him. The attendants of the Minister presented him to His Beatitude as the newly elected Minister with a broad and hopeful vision for work regarding the development of the environment of the Republic of Srpska in the sectors of agriculture, forestry and water management in cooperation with international organizations and with factors of the State of Israel where and for this purpose their visit takes place mainly emphasizing the cooperation with the Minister of Agriculture of Israel.

The Minister thanked His Beatitude for the time devoted by Him to accept him at the Patriarchate. He considers as he said the event of his visit to the Holy Land, the State of Israel and the Patriarchate, to be of outmost importance to his life and his political service.

His Beatitude expressed joy on this visit at the Patriarchate, the very ancient religious Christian institution in the Holy Land which has always kept relations of good cooperation with the country and the Church of Serbia promoting the unity in Christ and Church of all the Sub-Orthodox Christian nations to preserve the diverse cultural, linguistic and other particularities and traditions. The Patriarchate said His Beatitude encompasses in itself the Revelation of the Old and the New Testament and practices in the Holy Land deed of sanctification for Its believers as well as peacekeeping and conciliatory for the multinational and interreligious environment where it lives. The Patriarchate has as its tactic to act in a conciliatory way for the healing of schisms within the Orthodox Church.

On this visit, the Minister gave His Beatitude an album with the cultural and forest treasures of Srpska and asked for His Blessing for the veneration at the Most Holy Sepulchre and the Holy Calvary.

Blessing them, His Beatitude gave the medal of the Patriarchate on the 2000-year anniversary of Christianity and the newly edited book of History of the Church of Jerusalem by Chrysostomos Papadopoulos.