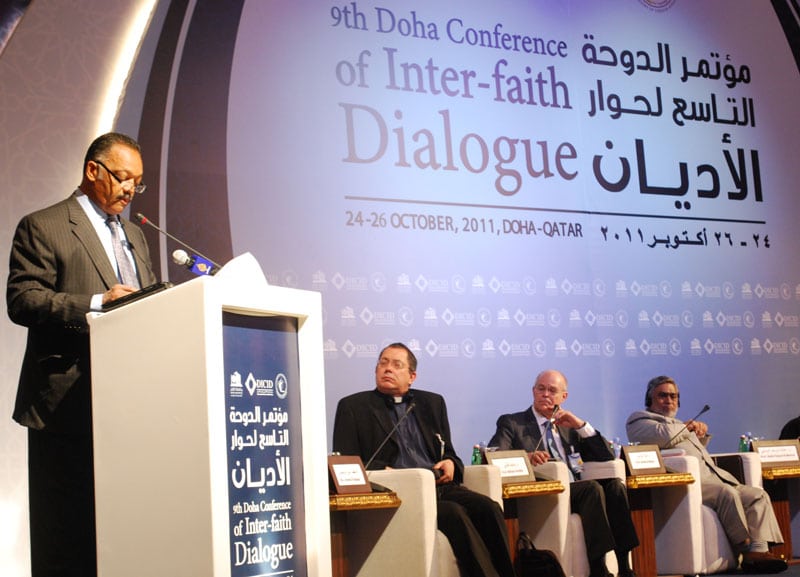 The three-day event, held at the Sheraton Hotel in Doha, focused on social media’s growing presence and effect on inter-religious dialogue. In the wake of the Arab Spring, the conference sought to evaluate social media’s role in the revolutions and raise the question of whether such communication technology could have a positive role in interfaith relations.

“It’s a must to discuss this,” said DICID chairman Ibrahim Saleh Al-Naimi in an opening address referencing developments in the Middle East since the beginning of this year. “There is a lot of communication and not enough dialogue,” he said.

“Without tolerance of the other, it can be a method of hatred,” said Al Ghanim.

Archimandrite Makarios, representative of the Jerusalem Patriarchate and priest of St. Isaac and St. George Greek Orthodox Church in Doha attended the conference, along with Deacon Dmitry Safonov from the Moscow Patriarchate.

“This is not just about co-existence, it’s about symbiosis, which is much more,” said Fr. Makarios. “It’s the fruit of this dialogue that we’re recognized by the State and live next to the citizens of Qatar.”

In the eyes of the Orthodox Church, the focus of the interfaith dialogue is for the people of not only Qatar, but the entire region, to be closer and know more about each other. It’s not only for the sake of knowledge of the other, but to cultivate symbiosis with those from different religious and national backgrounds, said Fr. Makarios.

In addition to Orthodox clerical representation there were lay people from Serbia, Romania and the United States present at the conference.

Workshops taught by experts in the field were offered for beginner and intermediate levels of proficiency in social media use throughout the conference. Meanwhile, main themes of discussion included social media’s history and development, positive and negative consequences, impacts on religious and local communities, and steps needed to create regulations within a framework of ethics.

Some addressed the implications of globalization on inter-religious dialogue, of which social media is an unequivocal part.

“The consequences of globalization are yet to be calculated,” said Rabbi Henry Sobel of Brazil. Globalization doesn’t foster true fellowship, although it can facilitate dialogue, he said, suggesting that nothing can replace a face-to-face encounter.

Dr. Aisha Al-Tayiab agreed with the panels that in-person contact is irreplaceable. “If people aren’t brought up to respect others, they won’t develop the proper ideas and behaviors later on,” she said. But she was less critical of the role social media can play when it’s used for positive social and political change.

As a Tunisian, she watched the impact of especially Facebook, on the youth of her country as they collectively pressured their president Zine al-Abidine Ben Ali to flee.

“I come from a country that experienced quantum leaps,” she said. “Facebook in the first days of revolution was so important; it was a control room.”

As the Tunisian example, along with many others has shown, young people have been most empowered by developments in social networking.

Hundreds of millions of young users are joining social media sites in a fraction of the time it’s ever taken to mobilize mass groups of people in the past, and they upload years worth of content each day.

With secular movements on the rise in parts of the world, one concern was where religious conversation can fit into the picture.

“The computer uses up a lot of productive time, especially from the youth,” said Bishop Sebouh Sarkisian from Iran.

He said that it was a duty of the churches, temples and mosques to teach morality and proper use of technology to the young people who will in turn make good use of the tools at their disposal and reach out to one another in acceptance.

Whereas young people might have an advantage in making use of the technology, it was suggested that the older generation can offer the wisdom and knowledge of the faiths that seem to lose their centralized authority in the virtual world of the Internet.

“Any communication between persons of differing religious points of view is sometimes described as dialogue – it’s not,” said Dr. Edward Kessler from the United Kingdom. “Once a message is posted online, control is lost and someone else may interpret what you’re tying to achieve as something else.”

A widely recognized problem with social media was its capability to create wedges between people. Several clergy members suggested that reaching out to others with love, as the Abrahamic traditions prescribe, generates more love, and that social media offers a unique chance to demonstrate love and kindness on a global scale.

“It’s not just a communication tool, it’s a connection tool,” said Professor William Vendley from the US. “The truly beautiful lies vested in the ugly.”

Several panelists gave examples of how their small grass-roots efforts reached a global scale due to the megaphone effect of social media. These projects, whether for charity or to combat stereotypes, transcended national and cultural borders.

“We speak of the Arab World, but in reality today – Arab community, European community, African community, Asia, US – we are inextricably bound,” said Jesse Jackson, African-American civil rights leader and Baptist minister. “We are one world.”

Reflecting on the past decade, Jackson labeled the transformation in the Arab world as a “bottom-up desire for change,” which was facilitated by social media. “Social media is serving to empower, inform and organize individuals and generated a feeling that change is real, can happen, and can be sustained.”

In the concluding session, final remarks were given by H.E. Abdel Rahman Mohammad Hassan Suwar Al-Dahab, former president of Sudan, Bishop Camillo Ballin of Italy, Professor Faruk Caklovica of Bosnia and Herzegovina, and Rabbi Herschel Gluck of the United Kingdom.

All participants of the conference were invited to attend dinner and tours of Doha’s Souq Waqif, Museum of Islamic Art, and cultural quarter Katara, where the Tribeca Film Festival will continue through the last week of October.