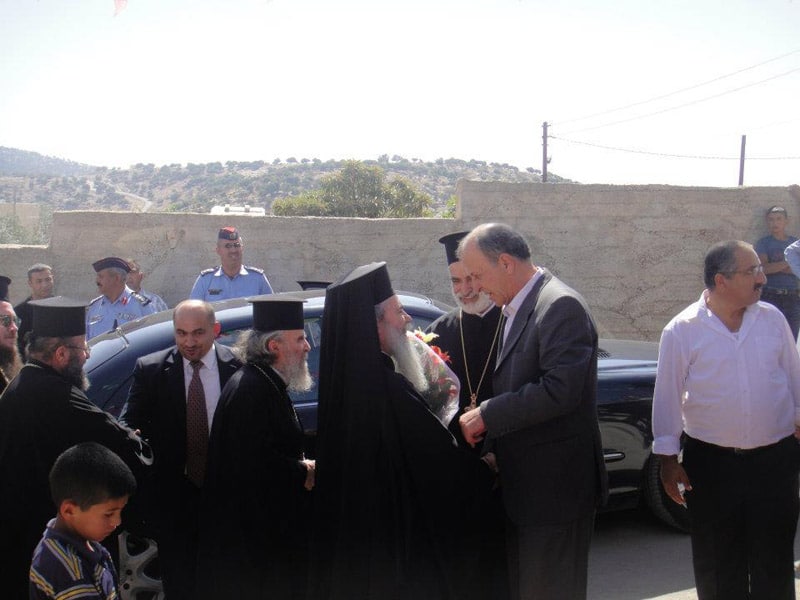 On Saturday October 2nd /15th 2011, His Beatitude Patriarch of Jerusalem Τheophilos set the foundation stone of a parish and school classroom at Uahadne village in Northern Jordan. In this important event His Beatitude was escorted by his Eminence Metropolitan of Philadelfia Patriarchal Vicar in Amman  Benedict, His Eminence  Elder Chief Secretary and Archbishop of Constantina Aristarchus, Archimandrite Hieronymus and Archimandrite Philoumenos.

On the way to this village, His Beatitude was welcomed at the city of Azloun by the Prefect Mr.Ali-Il-Azam and the Community Council at the City Hall of this city.The Prefect addressed His Beatitude stating the following:

“On behalf of the residents of Azloun and Your congregation as well as myself we welcome you to our city and we thank you for this visit despite your undertaken obligations which as we all know keep you occupied. Your congregation contributes to the life of our region culturally socially, financially and in many other ways, we therefore co-exist peacefully  Muslims and Christians based on the good relations between our country Jordan and Your country Greece”.

We thank the Lord for the understanding and the cooperation and for the foundation of the corner-stone at the church of Uahadne.

His Beatitude addressed the Prefect with the following salutation in Arabic https://en.jerusalem-patriarchate.info/ar/2011/10/14/685/

From the city of Azloun, the Patriarchal Escort set off for the Uahadne city passing through a beautiful landscape with highest hills and deep valleys with pine and kermes oak trees alternating.

Just before arriving at the city an honorary delegation of almost 100 individuals cordially welcomed His Beatitude and then again before entering the Holy Church of the Community in the name of Prophet Elias.

On arrival he addressed His Beatitude, His escort, the Prefect of Azloun and the numerous members of the community gathered under the set tent thanking them for their honorary visit and interest in favor of the progress of the community and His effort for the co-existence and symbiosis of the Christians and Muslims in this city according to the original Omar treaty between the Patriarch of Jerusalem Sophronios and the Caliph Omar Hatab and the created frame in the country of Jordan by His Majesty the King Abdullah B  Ibn Al Hussein. In this country as a mosaic, co-exist different religious communities.

After the above salutation His Beatitude conducted the service of the Holy Water and set the foundation stone for the future construction of the parish room, offering in the end on behalf of the Patriarchate (30.000) USD$.

After the placement of the foundation stone, parish priest Elias Protopresbyter  of this Community addressed His Beatitude thanking him for his pastoral interest, which supports and strengthens the life and the progress of the Uahadne community and all the communities of the Patriarchate in Jordan.

A student of the school also addressed His Beatitude thanking Him for the Patriarchate’s support to the school.

Mr. Ahmed Inad also addressed His Beatitude as a representative of Prefecture Azloun welcoming and thanking Him for the visit supporting the Greek-Orthodox Community and contributing to the peaceful co-existence between Christians and Muslims

In addition, the principle of the school spoke on behalf of the Muslims and Christians of the town saying that although he does not come from Uahadne he is proud of living in it. In this city, there is the model of cohabitation between Christians and Muslims. In it prevails the spirit of forgiveness that provides all people with the right to life indiscriminate of religion and nationality. He thanked His Beatitude for the visit and His support for the construction of the room where young people regardless of their religion will meet and receive education as for social co-existence.

The ceremony ended with Mr. Ibrahim Dabour addressing His Beatitude in Arabic as follows:https://en.jerusalem-patriarchate.info/ar/2011/10/14/687/

During  the salutation, His Beatitude gave Father Elias an icon of the Holy Mandelion and the Face of Jesus Christ and icons to each one of the participants in the ceremony. Afterwards the national anthem of the country of Jordan was sung and in this way, the ceremony was sealed.