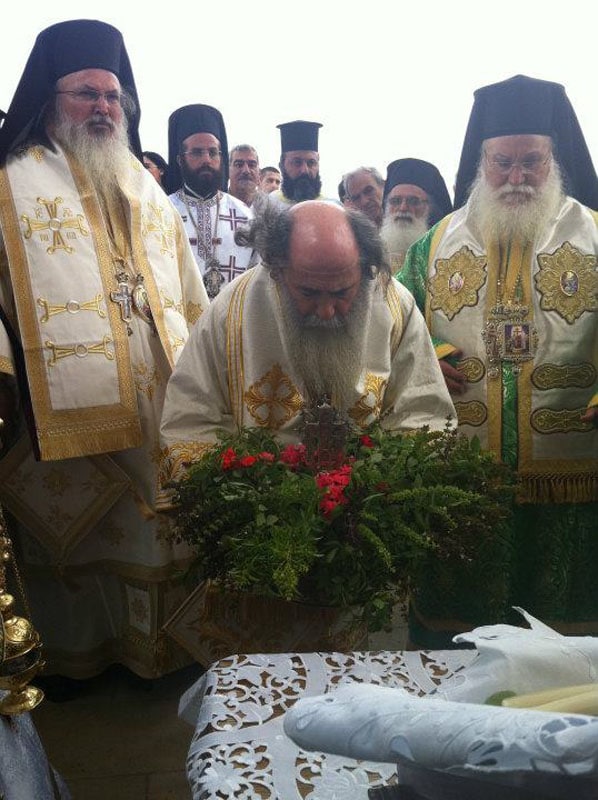 THE FEAST OF THE ELEVATION OF THE VENERABLE AND LIFE-GIVING CROSS IN NAZARETH.

In the middle of this estate there was a chapel constructed by the Father of the Holy Sepulchre and Metropolitan of Nazareth, owner of the land, which carries his name “Kasr-Il-Moutran” / “The Tower of the Bishop”. This chapel was, for reasons God only knows , deserted, open and desolate until two years ago when the Abbot of the Holy Monastery of mount Tabor Father Ilarion funded by a pilgrim from Greece who wished to remain anonymous renovated it and gave it to the Patriarchate so Liturgical services can be conducted.

In this chapel for the second time after its renovation His Beatitude conducted the Divine Liturgy concelebrating with Holy Metropolitan of Nazareth Kyriakos and Archieratical vestryman in Bethlehem Eminent Archbishop   Theofylaktos, Archimandrite F. Ieronymos, priests from Nazareth as well as neighboring cities, the choir or Nazareth together with the choir of Akkris directed by its Archieratical vestryman Archimandrite F. Philotheos

To the congregation participating in the D. Liturgy with piousness His Beatitude preached the Divine Word in Greek:

Our Holy Church celebrates this most remarkable feast of the Venerable Cross of our Savior Jesus Christ by the reverential feast of its Elevation  presided over by his Holy Beatitude Patriarch of Jerusalem, when St. Helen discovered It during her pilgrimage visit at the Holy Land.

Most remarkable of all is His Precious Cross, because as St. John of Damascus states: << For no other thing has subdued death, expiated the sin of the first parent, despoiled Hades, bestowed the resurrection, granted the power to us of contemning the present and even death itself, save the Cross of our Lord Jesus Christ. For by the Cross all things have been made right>>. <<So many of us, as were baptized into Christ>>, the Apostle says, were baptized into His death. As many of you as have been baptized into Christ, have put on Christ. Further Christ is the power of God and the wisdom of God. Lo! the death of Christ, that is, the Cross, clothed us with the enhypostatic wisdom and power of God.The mystery of the Divine Economy that is the incarnation of God Word wasn’t considered to be such a great scandal or foolishness, as the Word of the Cross through which the power of God was revealed that is victory over death, corruption and slavery of the devil.

Today we were made worthy ,clergy and people, of worshiping this same truly precious and august tree  as sanctified by contact with His Holy Body and Blood, in His sacred tabernacles, at the place where His Feet stood meaning Golgotha, which bringeth salvation and the Tomb which giventh  Life.

This very great mystery of the salvation of man is completed with the Crucifixion of the Word of God and His Resurrection. It is in fact attested by the fact that the Apostle Paul says unequivocally :<< But we preach Christ crucified, unto the Jews a stumbling block and unto the Greeks foolishness>>, (Corinthians 1, 23).

Truly my beloved ones, the Cross of Christ constitutes a scandal and foolishness. For those who deny God’s existence especially the ones who search God’s mystery especially the mystery of the Divine in Christ Economy without the power of faith <<But without faith>>, St. John of Damascus says, << it is impossible to be saved For it is by faith that all things, both human and spiritual, are sustained… By faith, we consider that all things were brought out of nothing into being by God’s power. We direct all things, both divine and human, by faith. Further, faith is assent free from all meddlesome inquisitiveness>>.

Faith is assent free from all meddlesome inquisitiveness, meaning without much examination, as for issues and things which concern the Divine, that is the Divine God’s power and energy, << For all the things that are of God are above nature and reason and conception>>.teaches St. John of Damascus explaining the preaching of wise Paul in his Epistle to the Corinthians. <<The word Cross is foolishness to those that perish, but to us who are saved it is the power of God. Therefore, behold, I will proceed to do a marvellous work among this people, even a marvellous work and a wonder: for the wisdom of their wise men shall perish, and the understanding of their prudent men shall be hid>>, (Isaiah 29, 14).And he adds:<< For the preaching of the cross is to them that perish foolishness; but unto us which are saved it is the power of God. For after that in the wisdom of God the world by wisdom knew not God, it pleased God by the foolishness of preaching to save them that believe>>, (first Corinthians 18, 19-21).

In other words, the Word of the Holy Cross even better stated faith in the Cross of Jesus Christ  includes the preaching and teaching of the salvation of man. Most specifically, it includes the place and the way of man’s salvation. The place, the land is Golgothas that is the Church where the Cross was elevated and the sanctified blood of God was sprinkled. The way is the food and the drink of the Body and the Blood of the Resurrected Christ by the power of the Life-Giving Cross.

The Cross-of the Christ, my beloved ones, means humility in fact <<And whosoever shall exalt himself shall be abased; and he that shall humble himself shall be exalted>>, (Mathew 23, 12). Exactly this power of depth and wealth of humility incarnates the Cross of Christ for which Paul preaches. <<And being found in fashion as a man, he humbled himself, and became obedient unto death, even the death of the cross. Wherefore God also hath highly exalted him, and given him a name which is above every name>>, (Philippians 2/8-9).

To this name, to the name of our salvation, to Christ who was crucified and risen for us let us together with the melodist of the Church openly cry: O Christ, Who for our sake didst deign to be tried, to be spat upon and scourged and Who ascended the Cross; Do Thou now grant us Thine honored Cross as a preserver and protector, and a dispeller of the demons; that, kissing it, we may all cry out to it: Save us by thy power, O Cross! Sanctify us by Thy radiance, O Precious Cross! And fortify us by thine exaltation, for thou hast been given to uses the light and salvation of our souls. Amen.

After the Divine Liturgy his Holy Metropolitan of Nazareth Kyriakos, profusely treated His Beatitude, his escort, and many others in the Metropolis of Nazareth.

(translated from the original document in Greek by Mrs Irini Valasi)