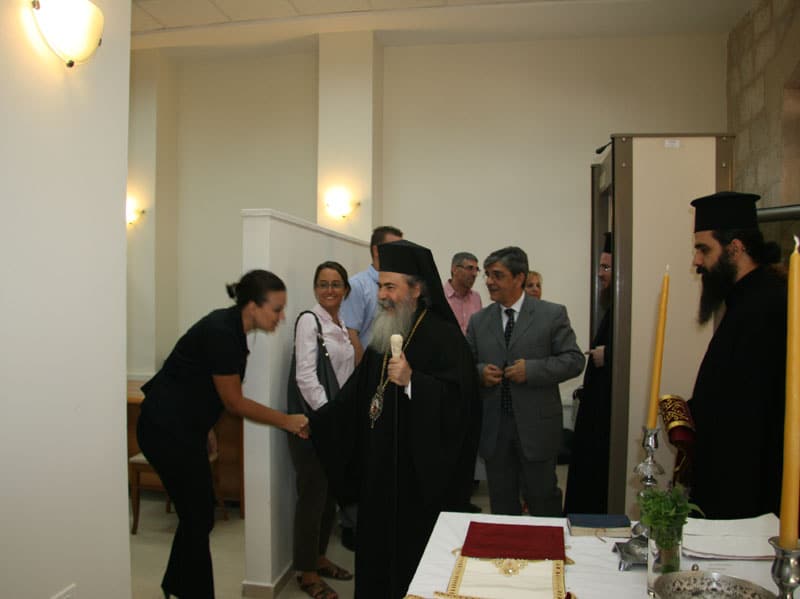 THE GREEK GEN. CONSULATE OF EAST JERUSALEM TRANSFERS TO THE OLD CITY.

On Friday, August 27th / September 9th 2011, was held the inauguration of the new building of the Greek General Consulate in East Jerusalem.

This inauguration, meaning the commencement of the affairs of the Consulate in this new building was done by the service of the Holy Water conducted by His Holy Beatitude our Father and Patriarch of Jerusalem Theophilos accompanied by the Elder Chief Secretary Archbishop of Constantina Aristarchos and the Elder Dragoman Metropolitan of Eleftheropolis Christodoulos and other Fathers of the Holy Sepulchre being present the General Consul of Greece Mr.Sotirios Athanasiou, his wife and the staff of the Consulate.

On this event His Beatitude gave the General Consul a painting to hang on the wall of the building depicting Lake Plastira saying that the transferring of the General Consulate to this place due to the initiative of the General Consul testifies the inextricable connection of cooperation between Greece and the Patriarchate for the support of the rights of our nation in Jerusalem and their undiminished interest in promoting the peaceful conciliatory resolution of its problem safeguarding respectable living conditions for all its residents.

The General Consul thanked His Beatitude for His support in the progress of this work and Mr. Nikolaos Ninos tenant of the building next to the Patriarchate.

On the occasion the elder doctor of the Greek community of Jerusalem Mr. Ioannis Tlil, writer of the Book “I am Jerusalem” donated to the General Consul two expensive carved models of Jerusalem on wood and, gesso one for the Consulate and one for his house handmade pieces of work by his late brother David Tlil.