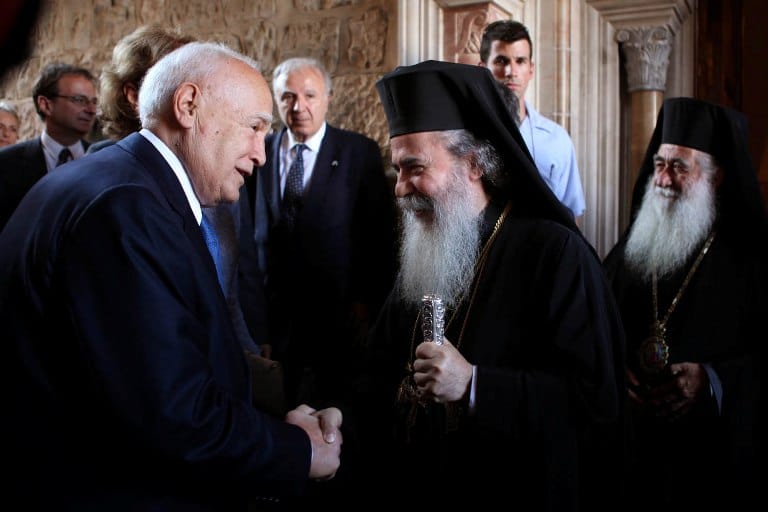 THE PRESIDENT OF THE HELLENIC REPUBLIC MR. KAROLOS PAPOULIAS VISITS THE PATRIARCHATE.

On Monday, 28th of June / 11th of July, the President of the Hellenic Republic His Excellency Mr. Karolos Papoulias, visited the Patriarchate of Jerusalem during his time in the Holy Land in the context of his official visit to the State of Israel and to the Palestinian Authority.

His Excellency the President was accompanied during this visit by his wife Mrs. Maria Papoulia and by political collaborators namely the Foreign Minister Stavros Lambrinidis, the Culture and Tourism Minister Pavlos Geroulanos, and the Deputy Environment, Energy and Climate Change Minister Yannis Maniatis. Escorts included the General Secretary of the Presidency of the Republic Ambassador Mr. Georgiou, Mr. Themistocleous Dimidou who has been General Consul of Greece in Jerusalem in the past, Mr. Dapharanou who has also been Consul of Greece in Jerusalem and the current General Consul of Greece in Jerusalem Mr. Sotirios Athanasiou. Upon his arrival, the President of the Hellenic Republic was received at the Patriarchate by His Beatitude Patriarch of Jerusalem Theophilos III along with Archbishops and other members of the Brotherhood of the Holy Sepulchre and members of the Greek Community where upon they headed to the Church of Resurrection by way of the Christian Road.

Then the President venerated part of the Honoured Cross kept adjacent to Adam’s Chapel at the Office of the Church Resurrection where they were received by the Sacristan Rev. Archimandrite Fr. Isidoros along with monks serving the Church of Resurrection.

Exiting the Church of Resurrection, His Excellency the President ascended to the Patriarchate again via the Christian Road and was received therein by His Beatitude Patriarch of Jerusalem Theophilos III who addressed the honorable guest with the following:

“Your Excellency, President of the Hellenic Republic

It is with joy and emotion that the venerable Brotherhood of the Holy Sepulchre welcomes Your Excellency and Your escort at the august Patriarchate of Jerusalem.

Your official visit to the State of Israel and the Palestinian Authority is very significant, not only for the political status and state of affairs of the land and the wider region of the Middle East, but also for the multi-dimensional mission of the Patriarchate of Jerusalem which incarnates the ecumenical character of the spiritual, religious and cultural heritage of Rum Hellenism.

The Hellenic nation, as an inextricable part of the pious and royal genus of the Rum Orthodox, rightfully boasts about its self–sown and inalienable privileges and sovereign titles and rights on the world-wide veneration sites such as those of the Church of the Resurrection and the Church of the Constantine Basilica in Bethlehem. This is because the moral and material contribution of the Patriarchate, through the centuries, towards and for the safeguard and preservation of the holy veneration sites, as well as towards and for of the intra–religious and the intra–Christian status quo of the Holy City of Jerusalem, happens to be absolute, undisputed and will remain undiminished.

It goes without saying that our pious Christian flock looks towards the national centre of Hellenism and its institutional representatives as the point of reference and as the point of its cultural identity respectively.

The known and ‘demonstrated with deeds’ interest of the Hellenic state and of You personally, for the Patriarchate of Jerusalem and the Christian presence in the Holy Places, as well as for the peaceful coexistence and symbiosis of the people of the Middle East, has not escaped Our attention.

We wish you success in Your peaceful mission.”

During this address His Beatitude also conferred upon His Excellency the President of the Hellenic Republic the highest distinction of the Order of the Knights of the Holy Sepulchre.

In addition to conferring the Order to the President, His Beatitude also presented His Excellency with a mother of pearl icon of the Last Supper and the book on the History of the Church of Jerusalem by the member of the Brotherhood of the Holy Sepulchre and latterly, Archbishop of Athens, Chrysostomos Papadopoulos, in its new Edition and benefaction of the Management of the official website of the Patriarchate of Jerusalem. To the President’s wife His Beatitude presented a golden cross and to the members of his escort, Jerusalemite blessings.

The President Mr. Papoulias presented His Beatitude with a laureate garland made of gold and expressed his gratitude for the decoration he received stating that this personal honour transcends to the whole of the Hellenic nation, which intends to overcome the economic crisis that has befallen upon it.

His Beatitude added that the nation with the power of the Honoured Cross of our Saviour Jesus Christ will look forward to the Resurrection.