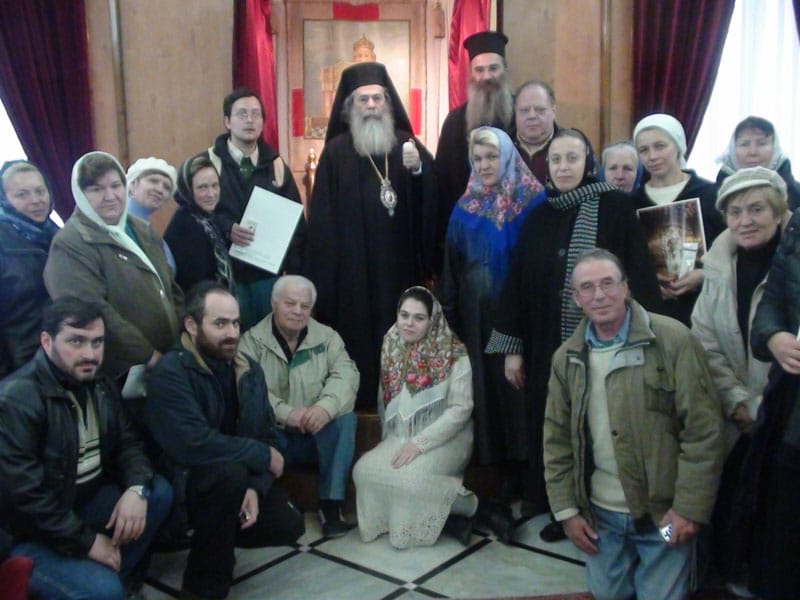 On Saturday, 2nd / 15th of January 2011, a team comprising of fifty Russian speaking Orthodox believers from the city of Be’er Sheva in Israel, visited His Beatitude Patriarch of Jerusalem Theophilos III.  They are among those who immigrated to various towns and villages of Israel after the collapse of the Soviet Union. His Eminence Theophylaktos Archbishop of Jordan and Rev. Archimandrite Fr. Aristovoulos have assumed the pastoral responsibility of these believers alongside His Beatitude Patriarch of Jerusalem Theophilos III and the Holy and Sacred Synod.

The aforementioned Russian speakers from Be’er Sheva attended a liturgy in the morning officiated by the Archimandrite Father Aristovoulos in the Holy Church of Saint Nicolas of the Patriarchate in the Old City of Jerusalem.  After the Holy Liturgy they visited His Beatitude, Who blessed them and wished them health and strength for the New Year. He assured them that the Patriarchate cares for them pastorally and that it is striving for the construction of a Holy Church for them at their city of domicile, Be’er Sheva.  His Beatitude then bestowed Jerusalemite benedictions upon them.