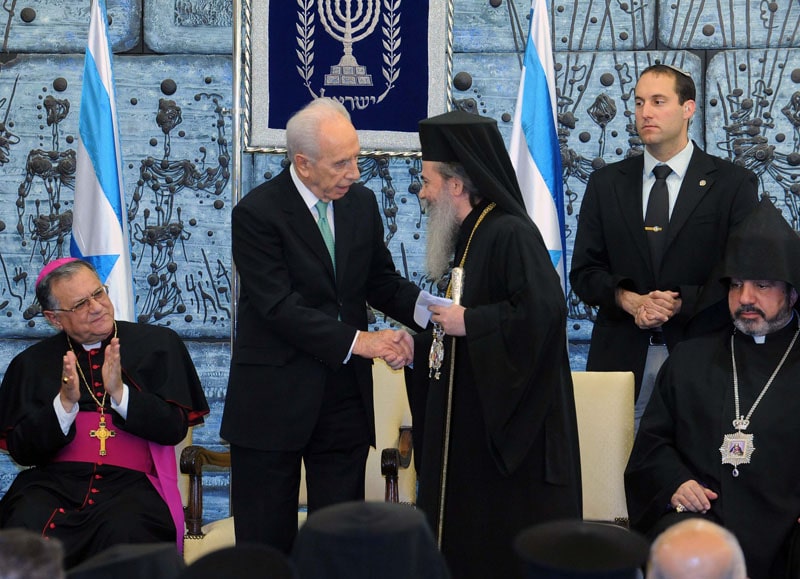 THE LEADERS OF THE CHURCHES OF THE HOLY LAND VISIT THE PRESIDENT OF THE STATE OF ISRAEL FOR THE NEW YEAR 2011.

On Wednesday, December 16th / 29th 2010, the Leaders of the Christian Churches of the Holy Land visited the Presidential Mansion of the State of Israel on the occasion of the New Year, as has been custom during the last few decades. This visit initially included a reception and, later, a ceremony that comprised the performance of fine musical compositions by the musician Mr. Yair Dalal from Bagdad. Following that a ceremony was held during which the President of the State of Israel, Mr. Shimon Peres, greeted and welcomed the Leaders of the Christian Churches and their escorts, Archpriests, Priests and laymen and wished  them and  their Communities a peaceful and blessed New secular year 2011.

Specifically he said: «I am happy about your response to the invitation for this event.  For us, the state of Israel, each person or religious institution is free to believe in all things of his, her or its own choice.  We have a common Fatherin Godand common heavens in the skies, therefore it is the duty of the religions, irrespective of their differences, to bring peace to the world just as it is the duty of the politicians.

The peace process is difficult; however, peace is a dire necessity.  I think that we have no other choice because we live in an era of high technology particularly regarding weapons.  Please allow me to caution that time is running out.  Palestinians are preparing to establish their own state.  The wiser means towards peace is to desire the progress of your adversary.  The better your adversary, the better it is to make peace with him.  Additionally, the necessity of peace is more imperative  for the reason that we have moved from the war on the battlefields, as was most often the case in the past, and have entered the era of the terrorist phenomenon  which, in order to confront it, requires the cooperation of many civil and religious entities..  We, the state of Israel,  are preparing ourselves for the ‘two states’ solution, in which you, the religious leaders, will most likely assume a very important role.  Please pray for peace to our one Father and God.  I wish for you and  your Communities that the new year of 2011 will be a year of peace, prayer, understanding, hope, cooperation, progress and success».

After that, His Beatitude The Patriarch of Jerusalem Theophilos III was invited to speak on behalf of the leaders of all the Churches of the Holy Land that were present. His speech, in English, is as follows (please access URL https://en.jerusalem-patriarchate.info/2010/12/29/1093/ )

Whereupon the event, on the occasion of the new secular year 2011 held at the Presidential Mansion, ended.