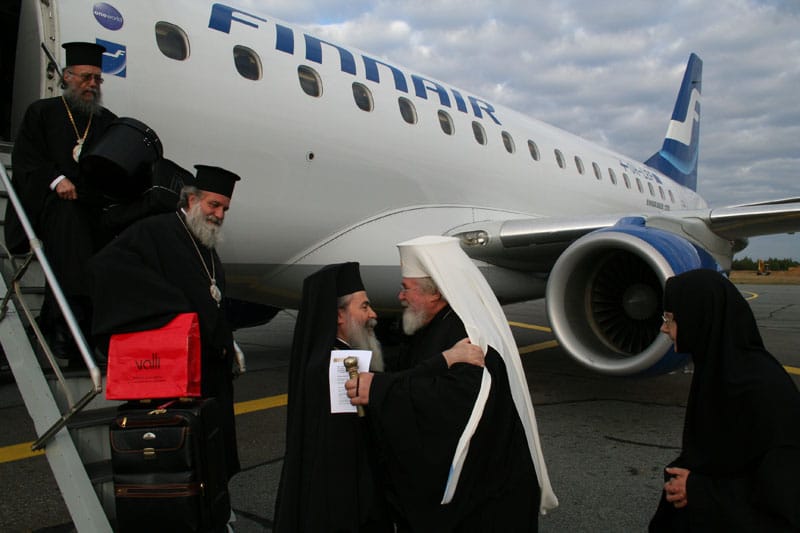 OFFICIAL VISIT OF HIS BEATITUDE TO THE ORTHODOX CHURCH OF FINLAND.

Since Tuesday 25th of August / 7th of September 2010, the official visit of His Beatitude Patriarch of Jerusalem Theophilos III to the Autonomous Orthodox Church of Finland has been taking place.

This visit was arranged after the attainment of an understanding between the two Churches, a pertinent Synodal decision of the Patriarchate of Jerusalem and in full knowledge of the Ecumenical Patriarchate.

For this visit, His Beatitude Patriarch of Jerusalem Theophilos III, departed on the morning of Tuesday  25th of August / 7th of September 2010 from Ben Gurion airport  TelAviv with Austrian Airlines and was accompanied by His Eminenence Hysichios Metropolitan of Kapitolias, His Eminence Dorotheos Archbishop of Avila and the Elder Chief Secretary His Eminence Aristarchos Archbishop of Constantina  and Rev.  Archdeacon father Athanasios.

The Patriarchal Escort arrived auspiciously in Vienna where, after a short stay,  it then departed for Helsinki by air.  The other two designated members of the Patriarchal Escort, the Arabic speaking Rev. Archimandrite father Galaktion Superior of Ramallah and the Arabic speaking Presbyter father Issa Mouslech, parish priest at the village of Beit Sahour / Village of the Shepherds and spokesman for the Press in the Arabic language for the Patriarchate, arrived in Helsinki via another flight from Jordan.

Upon His arrival along with His escort at Helsinki airport, His Beatitude was received with a warm welcome by a group of priests from the city of Helsinki, capital of Finland, and by the Ambassador of Greece in Finland, His Excellency Mr. Christos Kontobounisios.

After a stay of one and a half hours at Helsinki airportthe Patriarchal escort departed by air for the city of Joensuu.

Upon arrival at Joensuu airport in the evening, His Beatitude Patriarch of Jerusalem Theophilos III and His escort were cordially received by  His Eminence Archbishop of Karelia and the whole of Finland, Leon,  His Eminence Arsenios Bishop of Joensuu, priests of the Archdiocese, and Greek speaking personnel.

In the evening, after a brief rest, His Eminence Leon Archbishop of Karelia hosted a dinner banquet in honour of His Beatitude and His Escort. During this dinner, an interesting discussion took place concerning the Orthodox Church of Finland and the program for the subsequent days of the visit, which would be posted as a briefing on the world wide web.