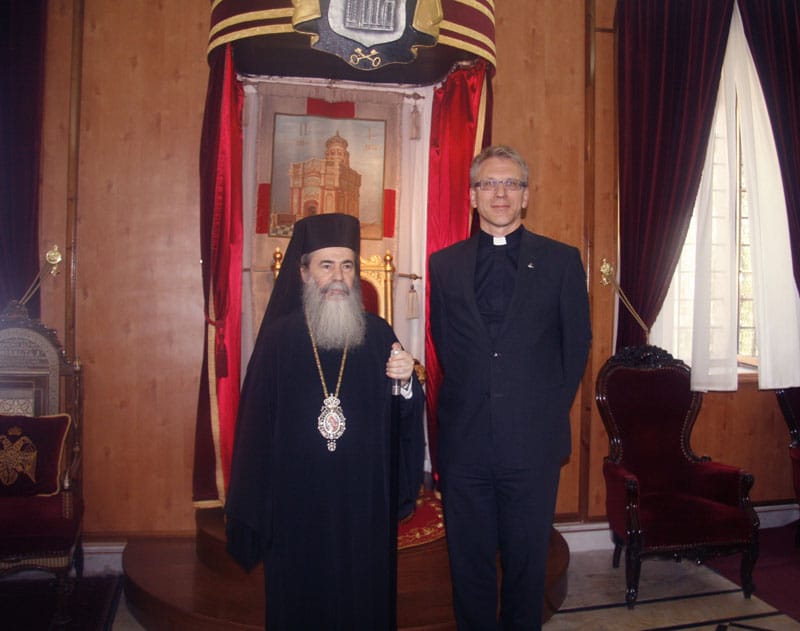 THE GENERAL SECRETARY OF THE WORLD COUNCIL OF CHURCHES AT THE PATRIARCHATE OF JERUSALEM.

On Sunday the 16th / 29th of August 2010, His Beatitude Patriarch of Jerusalem Theophilos III received the General Secretary of the WCC (World Council of Churches) Reverend Dr. Olav Tveit, accompanied by hiscolleagues, at the Patriarchate.

His Beatitude pronounced the blessings of Jerusalem to the recently elected General Secretary of the WCC. This election was made by the Central Committee of the WCC convened during the months of August and September 2009,  with duties being assumed from the beginning of the year 2010. Reverend Dr. Olav Tveit, in order for Reverend Dr. Olav Tveit to be able to continue his mission on behalf of the Christian rapprochement for the protection of human rights and for the peaceful coexistence between nations and religions, as an ecclesiastic and not as a  secular organization, as a place of prayer and of theological dialogue and not as a place of political activities.

The General Secretary explained to His Beatitude that he strongly wishes to renew communication with the Land where the Crucifixion and the Resurrection of Christ took place.

His Beatitude emphasized how important it is for the Patriarchate to contribute to thepreservation  of the Christian character of the city of Jerusalem and of its status as an open city to the adherents and believers of all religions.

The General Secretary asked about the renewal of the negations between Israelis and Palestinians and of the prospect of progress of these negations, His Beatitude replied that the religious dimension of the problem should be perceived, especially the cardinal one that is situated in the area of the Temple of Solomon and the mutual respective acceptance amongst the two nations, Israeli and Palestinian.

When asked to comment upon the situation in Gaza His Beatitude  detailed the work done by the Patriarchate from the beginning ofand throughout the crisis that started two years ago.

The General Secretary said the World Council of Churches pledges to stand by and support this work of the Patriarchate.

The General Secretary presented  His Beatitude with a symbolic present from the WCC, and His Beatitude presented him with the book by Dr. Fotios Dimitrakopoulos on the traditional place of Baptism of the Lord Jesus Christ by the Jordan River.

His Beatitude referred to the passing crisis of the Council of Churches of the Middle East and the need for assistance from the WCC in order to overcome this crisis.