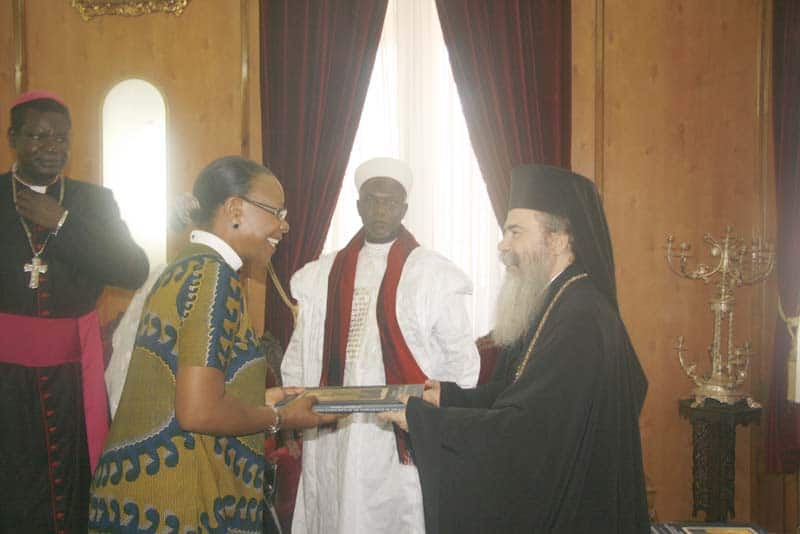 A GROUP OF AFRICAN RELIGIOUS LEADERS AT THE PATRIARCHATE.

On Tuesday 21st of July / 3d of August 2010, a group of African Religious Leaders, Christian and Muslim, led by Rabbi Dr. David Rozen, visited the Patriarchate.  Coming from 6 African countries and numbering around 15 persons, they were received by His Beatitude Patriarch of Jerusalem Theophilos III.  They were invited by the Israeli Ministry of Foreign Affairs and the American Jewish Committee as religious leaders of Muslim and Christian Communities in Africa, for the purpose of exploring possibilities for a more in depth dialogue and closer religious cooperation with the Middle East, all for the benefit of the peace process which currently remains at an impasse.

«The role of the Patriarchate», explained His Beatitude, «is to contribute to the pacification and the conciliation of people, amongst which the Patriarchate lives, moves and acts.  The political solution to the problem of Jerusalem requires the religious solution”

At the conclusion of the visit, His Beatitude presented them with the book by Mr. Votokopoulos on the illustrated manuscripts of the Library of the Patriarchate, a medal of the Patriarchate issued on the occasion of the two millennia of Christianity, and the photo-album of Mrs. Gali Tibbon on the Church of Resurrection and on the Orthodox ceremonies taking place therein as the navel of the Earth.