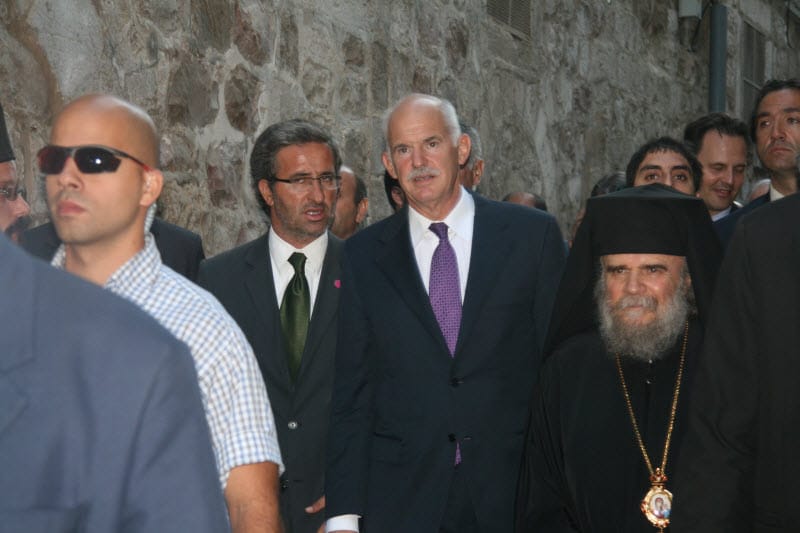 THE PRIME MINISTER OF GREECE HIS EXCELLENCY MR. GEORGE PAPANDREOU VISITS THE PATRIARCHATE

Within the framework of his two day visit to the State of Israel and the Palestinian Authority, the Prime Minister of Greece, His Excellency Mr. George Papandreou, visited the Patriarchate of Jerusalem on Wednesday, the 8th / 21st of July 2010, around 7:00 pm.

The Prime Minister was received at David’s Gate, by the Elder Chief Secretary of the Patriarchate His Eminence Aristarchos Archbishop of Constantina and by the coordinator of Ceremonies Rev. Archimandrite Fr. Porfyrios.

The Prime Minister was accompanied by Mr. Demitrios Droutsas, Deputy Minister of Foreign Affairs, Mr. George Petalotis, Assistant Minister to the Prime Minister and Government Spokesperson, Mr. Yiannis Zeppos Ambassador and Secretary General of the Ministry of Foreign Affairs, together with members of his political entourage and by the Ambassador of Greece to Israel His Excellency Mr. Kyriakos Loukakis, the Consul General of Greece in Jerusalem His Excellency Mr. Sotirios Athanasiou and a number of Greek and international journalists.  The Prime Minister was received and welcomed with honour and acclaim by the Archbishops members of the Brotherhood of the Holy Sepulchre, Priests and monks of the Patriarchate and members of the Greek Community at the entrance of the Central Monastery, the Patriarchate of Jerusalem. The Prime Minister was then greeted by His Beatitude Patriarch of Jerusalem Theophilos III at the entrance of the Throne Hall.

Following the Greeting, His Beatitude Patriarch of Jerusalem Theophilos addressed His Excellency the Prime Minister of Greece as follows:

The eminent Brotherhood of the Holy Sepulchre today receives and welcomes Your Excellency and distinguished escorts at the august Patriarchate of Jerusalem, with abundant joy. Your peaceful and mediating visit to this region of the Holy Land, which exhibits a political and religious turmoil and where the three Monotheistic religions namely Judaism, Christianity and Islam coexist is of important significance.

It entails particular significance, both for our Patriarchate, which embodies the holy and secular history of Jerusalem diachronically, a history which is connected with the multicultural amplitude of Romiosini and thus, with the history of the Christians in Palestine,  Jordan, and of course Israel, and moreover for our venerable genus and nation which said nation constitutes the moral and material patron and, even more so, the natural guarantor of the inalienable and ab antiquo vested privileges and sovereign rights on the Holy  Shrines with a worldwide character.

The religious and spiritual mission of the Rum Orthodox (Greek Orthodox) Patriarchate, based on the holy scriptures and evangelical commandments: “love thy neighbour as yourself”, (Mathew 19, 19), as well as “love thy enemies . . . you are rightly doing so to your enemies”, (Mathew 5, 44), this  constitutes a vehicle of respect towards the each person and on the other hand provides us with a place of peaceful coexistence and  conciliation among the followers of other religions and dogmas.

We say this now more than  ever before, that the Patriarchate today emerges as a natural and moral institutional factor, one which can contribute towards the solution of the theocratic or the religious Gordian knot that pertains to the diplomatic and political status quo of the future of Jerusalem (it is understood of the Old City of Jerusalem).

This is attested by the fact of the local and international recognition of the standing of the Patriarchate via its participation, not only in interreligious and interchristian dialogues but also, in international political – social conferences.

Being grateful for your genuine interest in the Holy Places and in the Palestinian people as affirmed by the respected Greek Government and You personally, we ask you to accept the wishes of the Brotherhood of the Holy Sepulchre and Our Patriarchal blessings towards the success of Your peace mission to the region.

Furthermore, please accept this decoration of the Grand Cross of the Holy Sepulchre, as an expression of our deep appreciation towards your person and support to the governance and the  financial-political task that you are undertaking with such patience and determination.

Following the address, His Beatitude Patriarch of Jerusalem Theophilos III, decorated His Excellency Mr. George Papandreou the Prime Minister of the Hellenic Republic with the Order of the Grand Cross of the Knights of the Holy Sepulchre along with the golden necklace as a sign of recognition and accolade for his services to the Hellenic Republic, the nation and to the Patriarchate of Jerusalem.

Visibly moved, His Excellency the Prime Minister of Greece Mr. George Papandreou responded with the following:

“Your Beatitude, it is for me and for the whole of Christianity an exceptional honour to have bestowed upon me this highest medal, that of the Grand Cross of the Holy Sepulchre, and I will carry this cross with the utmost honour and respect, as a symbol of the unbreakable bond between Greece, Fatherland of the Greek People and the Patriarchate of Jerusalem and the Holy Places.  I thank you especially for this honour, which will remain unforgettable for me”.

Subsequently His Excellency the Prime Minister signed the visitors book and venerated at the Chapel of Sacred Pentecost adjacent to the Throne Hall.

Following this, His Beatitude and His Excellency, accompanied by members of the Brotherhood of the Holy Sepulchre, descended to the Church of Resurrection where they venerated the Stone of Anointing, the Life Giving Tomb of our Lord and Saviour Jesus Christ-the Holy Sepulchre, and then proceeded to the Catholicon of the Church, venerated the Holy Calvary and the Holy Cross which is located at the Office of the Church of Resurrection.

From the Church of Resurrection the Prime Minister departed in order to carry out his peace mission to the State of Israel and the Palestinian Authority.