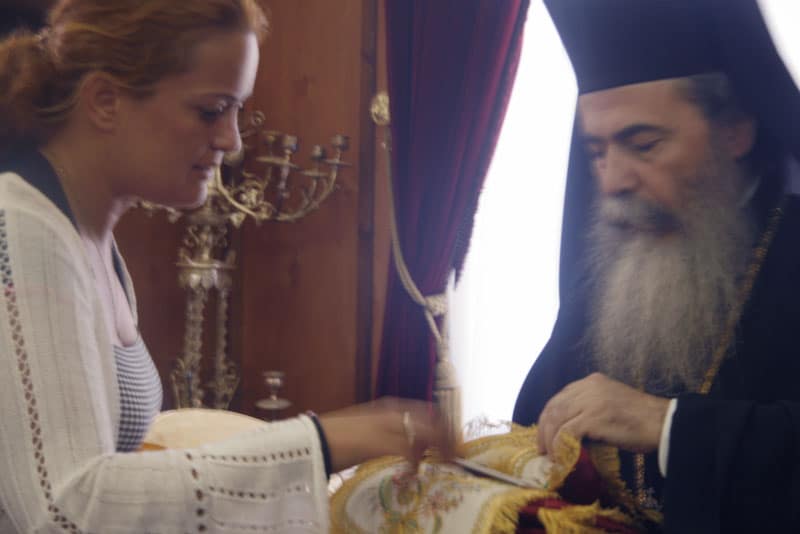 THE NGO ‘ROMIOSINI’ TO THE HOLY PLACES AND THE PATRIARCHATE.

On Friday 26th of June / 9th of July 2010, His Beatitude Patriarch of Jerusalem Theophilos III received a group of around 50 pilgrims who had come to venerate the Holy Places within the framework of a pilgrimage embarked upon by the Non Governmental Organization ‘Romiosini’ the purpose of which was the support and promotion of the Holy Shrines and their preservation by the Patriarchate of Jerusalem.

This pilgrimage included Egypt, the pyramids and the Holy Monastery of Saint Catherine in Sinai and, in the north and the south of the Holy Land, all the Holy Shrines including, primarily, the Church of Resurrection and the Holy Sepulchre in Jerusalem.

His Beatitude Patriarch of Jerusalem Theophilos III addressed the members of ‘Romiosini’ elaborating on the work done by the Patriarchate and the Brotherhood of the Holy Sepuchre in guarding and preserving the Holy Places of Christianity in the Holy Land. His Beatitude then presented them with souvenirs of the Holy Places praising them for their endeavours and unwavering support given to the august Patriarchate of Jerusalem.