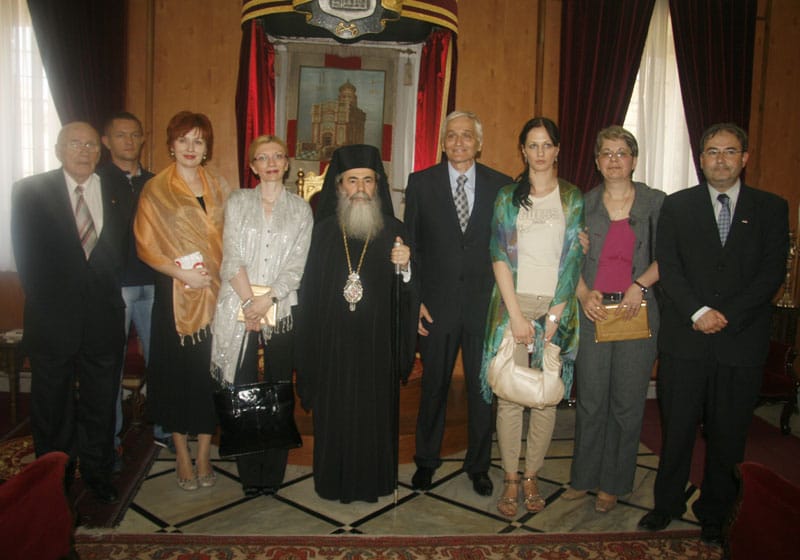 CHRONICLE OF MEETINGS OF HIS BEATITUDE DURING THE 3RD WEEK OF JUNE 2010.

1. Visit of the Chairman of the Council of Ministers of Bosnia and Herzegovina, NIKOLA SPIRIC.

On Monday, 1st of June/14th of June 2010, His Beatitude received the Chairman of the Council of Ministers of Bosnia and Herzegovina, Mr. Nikola Spiric. The Chairman of the Council of Ministers expressed his gratitude to His Beatitude for the reception and conveyed regards from the citizens of the region of Bosnia and Herzegovina where he comes from. He said that inhabitants of this region have paid the forfeit of the war. Furthermore, he implored His Beatitude to pray for their peace and prosperity.

His Beatitude informed Mr. Spiric that He follows the political developments and that He is aware of the events in the Balkans and in Serbia. The Patriarchate, as a representative of all Orthodox Nations in the Holy Land, undertakes a pacifying role in the region and receives pilgrims from all countries.

“The Patriarchate”, according to His Beatitude, “guarantees the unity of the various Orthodox Nations from the Holy Land”. The Chairman of the Council of Ministers reaffirmed His Beatitude about his personal endeavours to contribute to the peaceful coexistence of the national and religious minorities in Bosnia and Herzegovina. Furthermore, His Excellency the Prime minister implored the prayers of His Beatitude for peace, tolerance, coexistence and welfare in Bosnia and Herzegovina.

On Tuesday, the 2nd of June/15th of June 2010, His Beatitude Patriarch of Jerusalem Theophilos III received Mr. Paschalis Kitromilides, Professor of History at the University of Athens, the General Consul of Greece His Excellency Mr. Sotiris Athanasiou accompanied by the Honorary Ambassador His Excellency Mr. Alexander Filon and Mrs. Fotini Tomai-Konstantopoulou Head of the Historical Archives of the Greek Ministry of Foreign Affairs.

3. End of the school year at the Patriarchal School of Sion

Following this, His Beatitude Patriarch of Jerusalem Theophilos III received the professors and the students of the Patriarchal School of Sion and blessed them for the end of the school year.

Ioannis Miniadis, a graduate of the School, addressed His Beatitude and conveyed his heartfelt thanks for everything that was offered to him by the Patriarchate and the School during his attendance.

His Beatitude praised the lecturers for their devoted educational work, wished the students of the School happy holidays and a good return to the coming school year of 2010-2011, expressing them His optimism that they will meet the standards become members of the august Brotherhood of the Holy Sepulchre. He awarded the graduate the ‘Apolyterion’ and wished him a brilliant career.