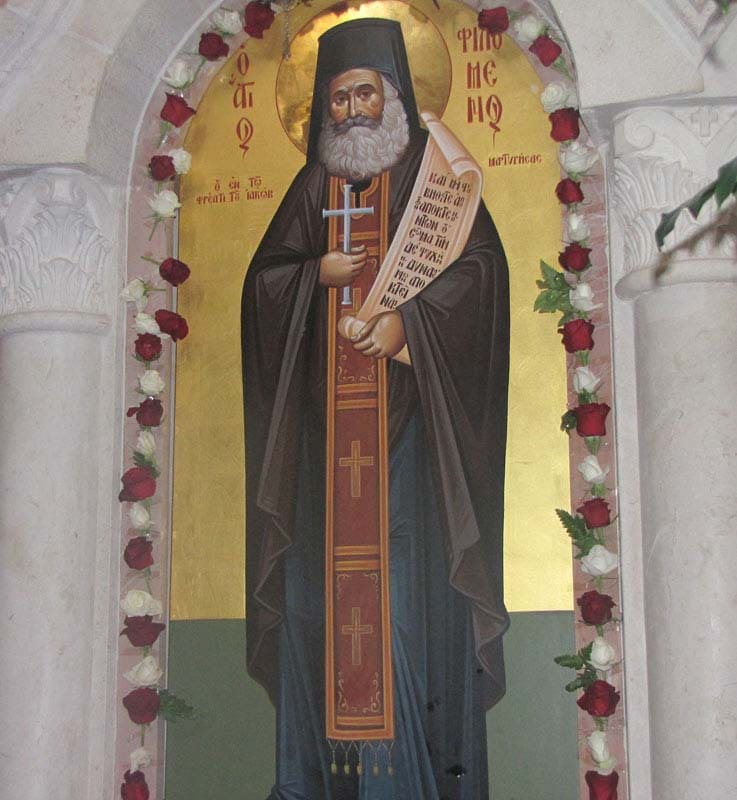 CLASSIFICATION TO THE HAGIOLOGION OF THE MARTYR FILOUMENOS, SUPERIOR OF JACOB’S WELL

Jacob’s Well, documented in the Old Testament (Gen. 33, 19) and in the New Testament (John 4), is one of the most authentic holy shrines of the Patriarchate of Jerusalem, placed between the mountains of Ebal and Geribim in the area of Samaria. The Brotherhood of the Holy Sepulchre has guarded this through the centuries for future generations as a precious inheritance.  At this shrine members of the Brotherhood of the Holy Sepulchre have served as Superiors. One of these Superiors was Metropolitan of Gaza Sophronios, who began on August 30th 1908 the construction of the beautiful and spacious church where Jacob’s Well is, but construction was halted in 1920. The divine Providence kept the honour of the completion of the church for the present Superior, Rev. Archimandrite Fr. Ioustinos.

In 1998 upon the foundations of the older church Rev. Archimandrite Fr. Ioustinos initiated the completion of this beautiful and ornate structure worthy of the history and the glory of the shrine at Jacob’s Well. The church is named in honour of Saint Fotini the Samaritan, to whom the Lord revealed by Jacob’s Well that He is The Messiah, Christ (John 4). Inside the church on the north side is a chapel named in honour of St. Ioustinos the Philosopher and Martyr, who originated from Nablus.  Within the church on the south side there is another chapel named in honour of Archimandrite Filoumenos, member of the Brotherhood of the Holy Sepulchre who on the 16th/29th of November, 1979 died violently at Jacob’s Well, where he served as Superior, and martyred.

At a young age, he came to Jerusalem and was ordained a schema monk of the Brotherhood of the Holy Sepulchre and the priesthood at the Mother of the Churches.  He lived a saintly life, and died by martyrdom from an unjust and unreasoned attack at Jacob’s Well on the 16th/29th, November 1979.  The Holy and Sacred Synod of the Patriarchate of Jerusalem, in a Synodic decision, classified him in its hagiologion at its Session 50th /11-9-2009.

For the enactment of this decision His Beatitude Patriarch of Jerusalem Theophilos III, escorted by Archbishops and Fathers went to Jacob’s Well.

On his arrival, he was cordially received by the Superior Rev. Archimandrite Fr.  Ioustinos, fathers of the Brotherhood and fathers of other Orthodox churches, while a host of believers had already filled this great church and the courtyard to capacity.

After the Matins with the ceremony of the Blessing of the Bread being performed, a festive Holy Liturgy took place, presided over by His Beatitude Patriarch of Jerusalem Theophilos III, concelebrating with His Eminence Amvrosios Metropolitan of Nablus, His Eminence Isychios Metropolitan of Capitolias, the visiting Metropolitans of the Church of Cyprus His Eminence Neophytos of Morfou and Issaias of Tamassou, the assistant bishop of Avlonos His Eminence Antonios, His Eminence Dorotheos Archbishop of Avila, and the Elder Chief Secretary His Eminence Aristarchos Archbishop of Constantina, and numerous members of the Brotherhood. Also participating were fathers from other churches such as Cyprus, Greece, Russia, Romania, and Ukraine, who were leading groups of pilgrims. Also present were the Consul General of Greece in Jerusalem, Mr. Sotirios Athanasiou, the Ambassador of Cyprus to Israel, Mr. Anastasios Tzionis, the diplomatic representative of Cyprus to the Palestinian Authority, Mr. Takis Demosthenous, and the Representative of the Cyprus Republic, Minister Emilios Nicolaou.

The Holy Liturgy was performed according to the order with Byzantine solemnity and splendour, the cantors chanted in the Byzantine style, in Greek and Arabic. Believers from different nationalities, Greeks, Cypriots, Arab-speakers, Russians, Romanians and Ukrainians, prayed in devoutness and participated in the mystery of the divine economy for our salvation, namely the incarnation of Christ, His Crucifixion and Resurrection, and the mystery of the divine Eucharist, their sanctification and the deification from grace.

This celebration acted as a testimony of Orthodoxy, a testimony of our True God, glorified by His saints. Saint Filoumenos, Archimandrite of the Brotherhood of the Holy Sepulchre, through whom God is glorified again, died by martyrdom on the 16th/29th of November, 1979 at the Shrine of Jacob’s Well, where he was the Superior. Before the Holy Communion, His Beatitude Patriarch of Jerusalem Theophilos III read the Patriarchal and Synodic Praxis of the saint’s classification in the hagiologion from the Great Entrance. This classification is in respect of the saintly life he lived and the fact that due to his faith, he was violently put to death by martyrdom at Jacob’s Well during the Vespers ceremony.

The Archbishops and priests distributed the Holy Communion to the believers, while His Beatitude presented them with newly well painted icons of Hieromartyr Filoumenos.  The establishment of the memory of Saint Filoumenos constitutes a celebration of Jacob’s Well, a celebration for the Church of Jerusalem, for the Church of Cyprus, for the city of Nablus, and gradually, it will constitute a celebration for all Orthodox Churches, which after this announcement of the Patriarchate of Jerusalem, will include him to their hagiologia.

The constructor of the church of Saint Fotini the Samaritan and the chapels of Saint Ioustinos and Saint Filoumenos, the Superior Rev. Archimandrite F. Ioustinos thanked His Beatitude for the decision in classifying the Saint and offered him a cross encrusted with precious stones for blessing. Then, following the Holy Liturgy he offered a sumptuous lenten meal to His Beatitude, His escorts and to all the participating believers.