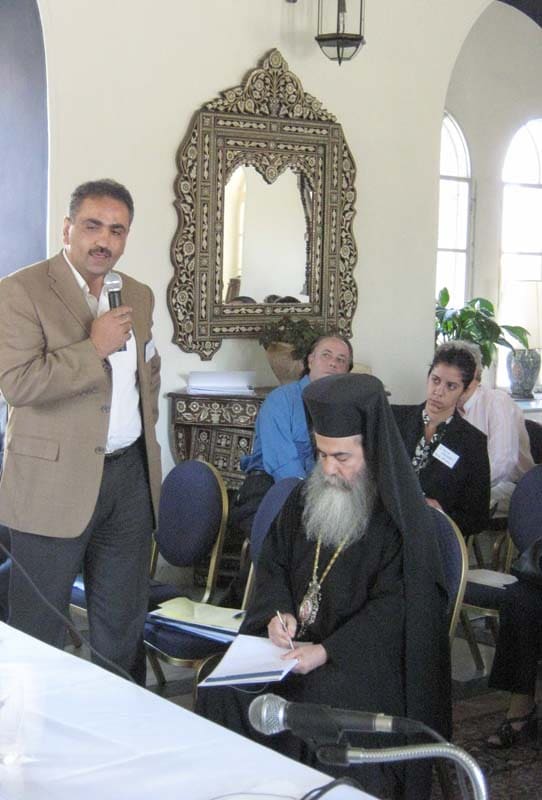 His Beatitude Patriarch of Jerusalem Theophilos III participated in the assembly of the ‘Council of Religious Institutions of the Holy Land’ that took place on August 5th, 2009, at the American Colony Hotel in East Jerusalem.

The ‘Council of the Religious Institutions of the Holy Land’ was first formed in the year 2005. It was formed with the initiative of the U.S. State Department and with the agreement of representatives of the three religions of the Holy Land, Judaism, Christianity and Islam, to continue and complete the task of the Alexandria Interfaith Summit, convened in 2002 at Alexandria, namely the peace initiative of religions to contribute towards the solution of the Israeli – Palestinian issue.

The primary objectives of this council are:

1. To foster an environment of mutual respect between the followers of the three religions in the Holy Land, and the respect of the Holy Places sacred therein.

2. The avoidance of defamation, offence or derogatory representations to the other, and to respect the individual dignity and freedom of people.

3. The respect of the religious character of Jerusalem, and the possibility to secure open access to the city for the followers of the three religions and all people that visit it.

The members of this Council believe that the three religions are able to contribute to the peace and reconciliation and the fostering of a political climate of detente. Without a solution to the religious problem of Jerusalem, it is not possible for a political solution to exist.

The primary theme of the present meeting concerned was of school text books for schools in Israel and the Palestinian Authority, entitled ‘The Israeli Palestinian School Book Project’. The conference started with a brief welcoming address by the convener of the Council, Rev. Dr. Trond Bakkevitz, who underlined the importance of the school text books in the schools of Israel and Palestinian Authority for the rapprochement of the two peoples, the fostering of a climate of political trust, reconciliation and peaceful coexistence.

After the opening address of the Secretary, His Beatitude Patriarch of Jerusalem Theophilos III addressed the participants at the meeting in the name of the Christian religious leaders as follows:

Remarks at the Planning Meeting

Of the Israeli-Palestinian School Book Project

Under the auspices of the Council of the Religious Institutions

Of the Holy Land

At the American Colony Hotel

Members of the Council,

We greet you warmly, and we welcome you all to the Holy City of Jerusalem for this important planning meeting for the Israeli-Palestinian School Book Project. The Greek Orthodox Patriarchate remains a dedicated member and firm supporter of the Council of Religious Institutions of the Holy Land and we recognize the importance of this particular project.

The commitment of the Patriarchate to education is well known. We have a great deal of experience in the field of education in our region and our schools are well known both for the quality of the education that they provide, as well as for the welcome that we give to study, regardless of ethnic or religious affiliation.

Education is, of course, one of the chief methods, by which we are able to fight prejudice and ignorance. No society can thrive without a strong educational system and education brings with it a deeper understanding of our world and equips our young people with the tools and skills that enable them to become citizens who are able to make a contribution to our common life.

Education is not simply utilitarian: learning is good for its own sake, and we all know the benefits that come from an education, that strives to broaden the mind and challenge the intellect. In the Christian tradition we have long understood the value of a broad education.

Jerusalem, in this case, and We mean the Old City, should be declared and turned into an inter-faith and multi-culture study centre.

The future of the Holy Land depends on the building of a society of genuine diversity, mutual respect and reconciliation. In this task education is key, and the Council can and must do all in its power to ensure that our schools and young people have the best trained teachers and the best resources possible, and to this end We are pleased to support the School Book Project and We look forward to seeing the fruits of its work.

Rabbi David Rosen hereby representing the Chief Rabbinate of Israel followed His Beatitude with another address, referring to the Alexandria Interfaith Summit, the forerunner of this Council, consisting of political and religious personalities of Jewish, Christian and Muslim faiths, with their own initiative and purpose of contributing to the efforts of peace in the Middle East. He also mentioned the meeting of the religious leaders in Washington, prior to the Annapolis Summit. He thanked Rev. Dr. Trond Bakkevitz for his strength in mobilizing the initiative of peace and overcoming the disappointments of our local failures.

He also thanked the representatives of the Norwegian Government and the U.S.A for their efforts towards peace. He underlined the importance of the Council’s mission to promote mutual respect between the three religions, individual human dignity and freedom, and the stance against insult and defamation of others. “These beginnings indeed constitute,’ he said ‘the basis of a peaceful political solution and reconciliation’.

Successively Mr. Greg Markese emphasized the value of this Project for the preparation of the peaceful coexistence of the two peoples.

Rev. Dr. Trond Bakkevitz, in between speakers, also highlighted how important the churches, schools and the various educational organisations are in spreading the teaching about the human person as an image of God.

Following this dialogue, Chair Professor Race Wexler, a member of the Council and a representative of the U.S. State Department, underlined the importance of education for peaceful coexistence, and noted that this had been the inspiration of the ‘Council of the Religious Institutions of the Holy Land’. He analysed the methods of actualising this project through the gathering of information and acquiring knowledge through special teams, assisted by the education ministries of the countries involved in the initiative towards peace. At the end of the meeting, Rev. Dr. Trond Bakkevitz expressed his satisfaction of the level of the presentations and pointed out the absence of the Palestinian and Muslim presence. The responsibility for the appointment of these representatives lay with the Palestinian Authority.

During the lunch of the Representatives at the Council, a discussion took place regarding the drafting of a statement about the future of Jerusalem. The outline of the exchange of views was as follows:

‘This matter, namely the future of Jerusalem, was discussed by some members of the Council in Oslo and Washington. All religions have a place in Jerusalem; all religions have a historic bond with Jerusalem. When referring to Jerusalem, we mean the Old City. The heart of the problem is essentially two places of pilgrimage: the Temple of Solomon and the Tomb of the Patriarchs in Hebron. At these places there is mutual distrust between followers of Judaism and Islam. The respect for the history and the confines of each religion, as in the case of Patriarch Sofronios and the Khalif Omar Hatamb, is possible to constitute the outset for the solution of the political problem. There is the view that the political problem creates the religious one, while there is the prevailing notion that the religious problem at these sacred places is also creating the political polarization. Through education is fostered a climate of religious tolerance and coexistence’.

An examination then took place of the scheduled planning of the activities for the ‘Council of Religious Leaders of the Holy Land’ in the year 2009 to 2010. Specifically this included prioritising Jerusalem; open access to the Holy Places, education, the political interaction of the Council towards the Israeli government, the Palestinian Authority and Non Governmental Organisations.  Final concerns included the creation of a website for the Council, the appointment of new Islamic representation on the Council, and the determination of dates for the next two convocations of the Council; November 3rd, 2009 and April 22nd, 2010.