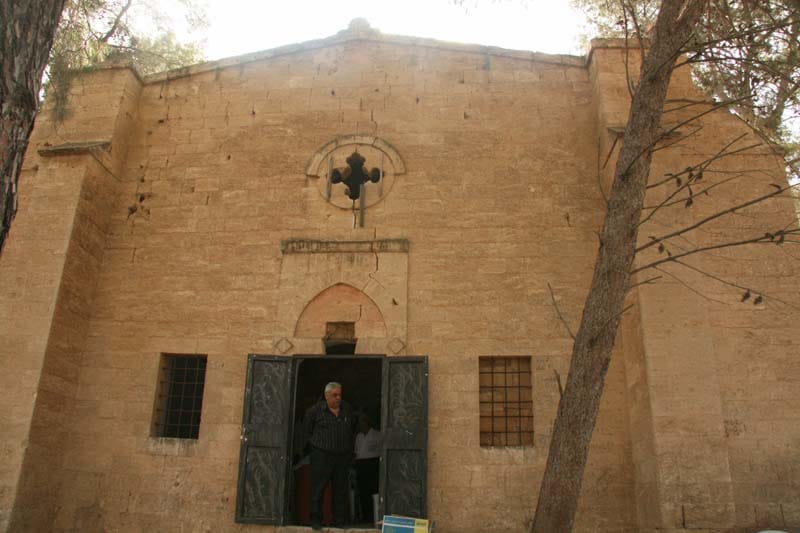 The town of Maaloul is located at a distance of 20 minutes by car, west of the city of Nazareth. It is one of the towns which the Palestinian residents left after the founding of the state of Israel in the year 1948. Included amongst its residents of important standing were Arab–speaking Christians, the so-called ‘Romea’ Rum Orthodox who were numbered about five hundred. The Church was dedicated to the Ascension of Our Lord, and to Prophet Elias the Thesvetin. They were obliged to leave due to the circumstances of that time. This town is located in an area with cultivated pine trees and now encircled by an Israeli military base.

After a period of sixty years, 1948–2008, it became possible for the Patriarchate of Jerusalem to assert the re-officiating of this church.  This was due to the efforts of His Beatitude Patriarch of Jerusalem Theophilos III, His Eminence Kyriacos Metropolitan of Nazareth and Rev. Archimandrite Hilarion, Superior of the Holy Monastery of Transfiguration at Mt. Tabor.  His Beatitude assigned a Turkologist, a specialist of the Ottoman Era, who retrieved for Him the Patriarchate’s titles of ownership from the Land Registry. His Eminence Kyriacos Metropolitan of Nazareth cooperated with the Israeli Military regional Authorities for the free access to the Church and the performing of the Holy Liturgy. The Superior of the Mt. Tabor Monastery Rev. Fr. Hilarion tended to the church, plastered and whitewashed it as best he could and brought the necessary liturgical objects used for the Holy Liturgy, seats for the believers and whatever else was needed.

Thus when everything was ready to the finest extent for the first Holy Liturgy to be performed in sixty years, His Beatitude Patriarch of Jerusalem Theophilos III arrived from Jerusalem after a short visit to the Holy Metropolis of Nazareth, on the morning of the 19th of July/1st of August 2009. The Holy Liturgy was presided over by His Beatitude, concelebrating with His Eminence Kyriacos Metropolitan of Nazareth, His Eminence Issychios Metropolitan of Capitolias, His Eminence Aristarchos Archbishop of Constantina and Elder Chief Secretary, the Superior of the Holy Convent of Mt Tabor Rev. Archimandrite Hilarion, The Superior of the Holy Convent at Cana Rev. Archimandrite Dositheos, priests of Nazareth and of the area of Acco together with participating devout Orthodox believers from Nazareth and the surrounding areas, many of who came to see the place of their ancestors or the graves of their parents and grandparents at the adjacent cemetery. The choir of Nazareth chanted in devoutness in Byzantine style.

Indeed, the Liturgy was moving at this architecturally significant church, surrounded with supporting buttresses, with no plaster on the ceiling, the windows without shutters, situated in the wilderness where even pines and greenery grow naturally on the roof, yet the Church was duly tended and adorned for this solemn Liturgy.

His Beatitude spoke to the believers on the divine word referring to Prophet Elias as the Prophet of the true God, who prayed to God for it not to rain and it did not, then to rain and it did.  The Prophet who descended from the heavens and burned the woods and rocks of the altar on Mount Carmel and massacred the priests of shame, who resurrected the son of the widow at Sarepta in Sidon, who gave testimonies about God in front of Kings and was not ashamed and, as the hymnographer writes in the ‘troparion’, is the “second Forerunner – ‘Prodromos’ of Christ’s presence”. His Beatitude added that the personality of the Prophet transcends the ages, is above any nationality and is respected by Christians and followers of other religions. “This personality”, His Beatitude said “gathered all of us on this day in honour of his memory at this ancient and venerable church, which had been partially deserted due to the circumstances, kept through divine grace and thence passed to the Patriarchate again to be preserved and re-officiated, thanks to the good will of the surrounding Israeli Military Authorities and the love of those who dignify the house of God namely His Eminence Kyriacos Metropolitan of Nazareth and the Superior of Mt. Tabor Monastery Rev. Archimandrite Fr. Hilarion”.

Mr. Zarzoura, the President of the Executive Committee, who was invited to this lunch, thanked His Beatitude for this initiative at Maaloul, which prepares the way for the preservation of other properties of the Patriarchate as well, and praised referred to the relationship between the flock and His spiritual leadership, which is discerned for its transparency, without which, he continued, “we as the flock cannot possibly exist.”

H.H.B. THE PATRIARCH OF JERUSALEM THEOPHILOS VISITS THE GREEK ORTHODOX COMMUNITY OF SHAHNIN