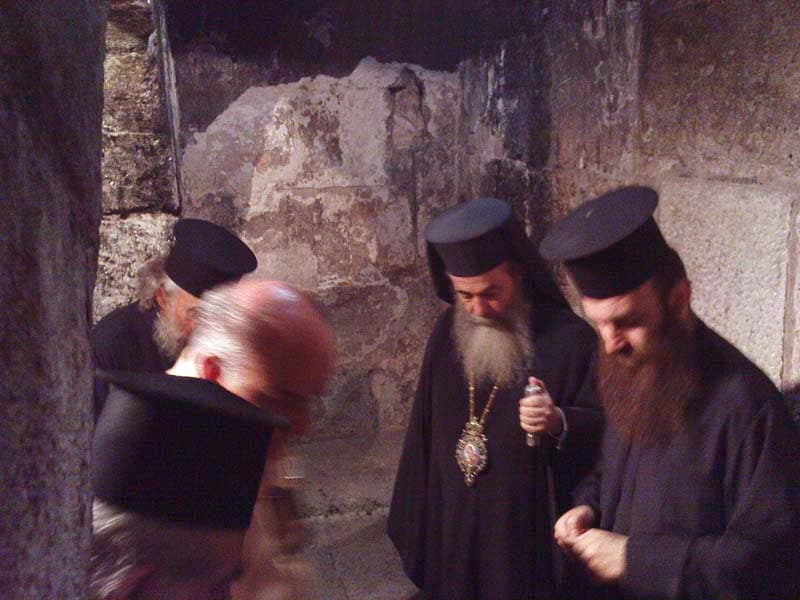 On Thursday 26th /9th of July 2009 His Beatitude Patriarch of Jerusalem Theophilos III, escorted by Archbishops and priests of the Patriarchate, descended to the Church of Resurrection, where He was received by the Sacristan Rev. Archimandrite Fr. Isidoros and by Fathers of the Church of Resurrection, along with Mr. Theodosios Mitropoulos the Architect of the Church of Resurrection. They visited the north transept of the Catholicon (Heptakamaron-Seven Arches) where the ancient Chapel of the ‘Prison of Christ and the Fainting of Virgin Mary’ is located, behind the Chapel of ‘Clappae’. This is where, according to ancient tradition, the Lord was being held during the preparation of the Cross at the Holy Calvary.

On the ceiling and floor of this Chapel there are architectural features from the Constantine period and from the epoch of the Patriarch of Jerusalem Modestos, after the Persian invasion of 614 A.D. These preserved elements will be distinguished and better presented as a result of the restoration that is taking place at the Chapel and will better serve the worship and liturgical needs of the believers. At this place a discussion was held regarding how the Holy Altar and the Holy ‘Prothesis’ (table for the preparation of the Holy Gifts) should be arranged.

After this, His Beatitude met with the participants of the organised pilgrimage of the N.G.O ‘Romiosini’, which occurred at the Holy Places between the 9th and 13th of July. At the meeting they talked about and reviewed the congress held last month, ‘Romiosini throughout the centuries’, and the importance of ‘romiosini’ as the backbone of our nation. The guests brought with them medicines as humanitarian aid for the Polyclinic ‘St. Venedictos’ situated in the Patriarchate’s premises. During the following days the pilgrims had the opportunity to participate in a sacred devout vigilance at the Church of Resurrection and also to participate in a devout intercession to the honoured St. George the Great Martyr and Triumphant, at the Holy Monastery of St. George in the Jewish quarter of the old city. Finally they concluded their pilgrimage with visits to other Holy Shrines.

VISIT OF HIS BEATITUDE THE PATRIARCH OF JERUSALEM AT THE RUINS OF THE H. CHURCH OF ST. STEPHEN IN RAMALLAH

MAINTENANCE WORKS OF THE ICONOSTASION & ICONS OF ST. THECLA’S CHAPEL