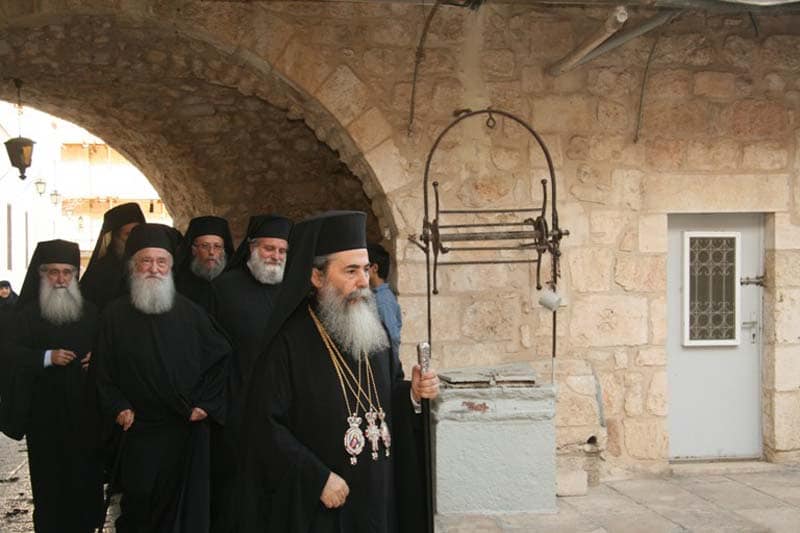 THE FEAST OF ST. CONSTANTINE AND ST. HELEN CELEBRATED IN THE PATRIARCHATE OF JERUSALEM

In the person of Emperor Constantine the Great and his Mother Empress St. Helen, the Church acknowledges the divinely crowned royals and equal-to-the-apostles.

It is so because they embraced Christianity, they gave an end to the three century long Christian persecution and allowed the free practice of Christianity by believers through the royal decree of Mediolanum of 312A.D.

In the early evening Great Vesper was performed along with the ceremony of the Blessing of the Bread, presided over by the Superior of the Brotherhood of the Holy Sepulchre, His Beatitude Patriarch of Jerusalem Theophilos III.

According to the custom following the Vesper, His Beatitude and the Fathers shared ‘kollyva’, bread and wine at the duly prepared forecourt of the Church.

On the morning of the feast day His Beatitude Patriarch of Jerusalem Theophilos III presided at the Matins and the Holy Liturgy concelebrating with priests, members of the Brotherhood of the Holy Sepulchre.

After a resplendent and devout Holy Liturgy, His Beatitude in full vestment together with participating priests and Archbishops of the Brotherhood of the Holy Sepulchre, headed in chanting procession to the Patriarchate.

During his address at the Throne Hall, His Beatitude particularly emphasized the fact that the Church is rejoicing this day in memory of Constantine the Great, for he, like the Apostle of the Nations, Paul, received the divine call to support the Evangelical message. The Great Apostle spread the message of the Gospel to the world and St. Constantine granted freedom to Christianity through the Mediolanum Edict of 312A.D and established Christianity as the official religion of the Roman-Byzantine State. Constantine the Great founded Constantinople, the New Rome, and convoked the first Ecumenical Synod in Nicaea in 325A.D over which he presided.

In addition, His Beatitude stressed the fact that the Church of Jerusalem and the Brotherhood of the Holy Sepulchre are proudly rejoicing at this feast of the divinely crowned royals and equal to the apostles ‘isapostles’, Constantine and Helen, particularly since they are recognized as the founders of the Church of Resurrection, the Basilica of the Nativity of Bethlehem and the monastic Order of ‘Spoudaei’. The city of Jerusalem owes its Christian character to St. Constantine and St. Helen, as revering the Holy Pilgrim Places and in debt they are honoured.

A monastic lunch then followed the reception at the Patriarchate.